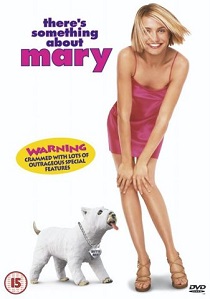 ReviewComedy
Review Article Go back to homepage
Ted still suffers from his high school crush and thirteen years after his disastrous, and painful, prom night with Mary he decides to track her down via a sleazy private investigator. Unfortunately, he has also fallen for the beautiful Mary and both men soon discover they are not the only ones determined to her affections.
Mary, Ted, Healy, Tucker, Warren
Comedy
2
1 Hour 54 Minutes
Thank you for supporting DVD365.net when you order using the link(s) below.
Buy DVD
Story

Ted finally decides to use private investigator Healy to track Mary down, but on locating her he decides that he would like her for himself and makes up a story of her being married, fat and just about anything to put Ted off.

Healy uses all his investigative skills to get the upper hand to win Mary's heart. He listens in on her conversations and fabricates a character to match her wildest dreams. He is succeeding until, after a change of heart, Ted turns up and causes him to use even more devious methods to force Mary to dump Ted. Unfortunately for the pair, another man with a fake personality is also trying to win her affections and there is yet another ace in the pack to be played before the film is out.

W. Earl Brown's performance as Mary's retarded brother Warren is exceptional. At the time the directors had to perform many test screenings to ensure that the portrayal of a retarded person wasn't offensive. Thankfully, the character was retained and was unquestionably treated with the respect required. It is only down to their genius that they still managed to insert a comical element in to his character without offending anybody.

The picture is crisp and sharp and the sound is crystal clear, although there is little need for the use of the surround channels. The extras are adequate, including a rather naff special featurette about the 'zipper incident'. The only bonus with this is that it is not on the R1 version, however, the R1 version has outtakes instead. Again, a company sees fit to vandalise the cover informing us about the extras. We are quite capable of turning the box over and reading about them for ourselves thank you very much!

This film may not be everyone's cup of tea, but if you like the Farrelly brothers (Dumb and Dumber, Kingpin) and their warped sense of humour then it will soon have you rolling around the floor. It is truly a comical masterpiece. It is certainly worth revisiting this film with the director's commentary enabled. There's quite a few interesting facts to be learnt about the film with one of the most interesting being that 99% of the cast and extra's were either friends or relations of the Farrelly brothers. Talk about nepotism!

Interestingly enough, this was Lee Evans' first venture into American films, and his American accent was perfect. Indeed many a commentator thought he actually was American and criticised him on his poor English accent. Oh, and one final comment. I bet there's not one man who doesn't wince at the now infamous zipper scene!