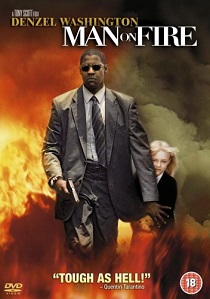 Panic is rising in Mexico City as the city is becoming overrun by organised crime. Kidnappings are out of control and Latin America has the unfortunate record of suffering a kidnapping every 60 minutes. Seventy percent of the victims do not survive. With personal insurance premiums rising due to the increasing abductions, wealthy citizens are forced to hire bodyguards to protect themselves and their families. However, they don't come cheap, and all of the best ones are either already taken, or dead.

John Creasy is an ex-CIA operative who has lost faith in humanity and is set on a path to self-destruction via the bottom of a bourbon bottle. Things begin to change for Creasy when ex-CIA colleague and friend, Rayburn, offers him the chance of some easy money by introducing him to a wealthy businessman who is in need of a bodyguard.

Ever since his last body guard left, and given the current level of kidnappings, Samuel Ramos has been in desperate need for a new one. And with money tight he can't be too choosey. Still, he is impressed with John and he is soon employed to protect both his wife Lisa and nine-year-old daughter Pita. Ever the solitary type, John simply gets on with his job and takes Pita to and from school. However, Pita ever so slowly breaks down Creasy's defences, and a friendship grows between them as she gives him reason to believe in people again.

Ever since his last body guard left, and given the current level of kidnappings, Samuel Ramos has been in desperate need for a new one. And with money tight he can't be too choosey. Still, he is impressed with John and he is soon employed to protect both his wife Lisa and nine-year-old daughter Pita. Ever the solitary type, John simply gets on with his job and takes Pita to and from school. However, Pita ever so slowly breaks down Creasy's defences, and a friendship grows between them as she gives him reason to believe in people again.

But when Pita is suddenly snatched from Creasy's watch, and seriously injured in his desperate attempts to save her, Pita's family is completely devastated. With Creasy's new lease of life ripped away from him once again, he promises Pita's mother that he will take revenge on anyone profiting from the kidnapping. As he starts to journey into the dark and mysterious underworld, Creasy soon discovers that the city is run by a corrupt and sophisticated organisation. And with Creasy being an efficient and ruthless ex-CIA operative, he is more than ready and able to dish out some revenge and retribution as he tries locate Pita.

Given the exciting cinematography and the number of dark and subdued scenes the transfer has the potential to be a little testing. And it certainly is, with plenty of bright scenes and over overt greens and reds giving the rise for plenty of issues with the image. Still, the transfer holds up extremely well, even if it can be a little grainy and over exposed at times, although this is most likely a deliberate ploy by the director. Yet even with these apparent problems, the picture manages to remains sharp and contains a good level of detail and excellent black levels throughout. One thing is for sure, it's all very stylish and impressive, and director Tony Scott is well worth his pay cheque for this film. Naturally, for such a recent release the print is free from any sign of dust scratches and other forms of print damage.

With the film running at the best part of two hours the film is surprisingly accompanied by a pair of rather dynamic Dolby Digital 448 Kbps and DTS 768 Kbps soundtracks. And neither is going to disappoint as they both deliver some superb stereo steerage at the front plus some extremely bright and clear dialogue in the centre channel. Denzel Washington's character has never sounded so menacing, and it's utterly brilliant to listen to.

But it is the rear channels where all the action occurs, and it's a pretty stirring mix too. Never over done, or used for the sake of it, the ambient effects are superb whilst even the subtlest of effects find their way to the rears. It makes the film all the more involving and when combined with enough thunderous LFE effects from gun fire and explosions to attract the attention of the local SWAT team, you really do have a soundtrack to be proud of. Naturally, it is a question of choice, but if a disc comes equipped with both audio tracks I will always opt for the DTS version. Whilst both soundtracks are more than capable of holding their own, it is the superior separation and presence of the DTS soundtrack which ensure that it triumphs over its Dolby rival.

One you get past the increasingly annoying trailers for other DVD releases, the main menu is impressively animated and scored whilst the sub-menus are static but scored. There's also a nice transition effect between the menus whilst everything is cleanly laid out and easy to navigate through. Already equipped with Dolby Digital and DTS soundtracks, the bulk of the extras have been farmed out onto a second disc. Unfortunately, I only was only sent the first disc for preview so I am unable to comment on the second disc. However, judging by the presentation and quality of the first disc, the second disc should be just as impressive as the first.

Given the capacity sucking soundtracks it is surprising to find a Feature Audio Commentary by Tony Scott. And clearly loving his job, an enthusiastic Scott supplies plenty of information about the production, its tricky location problems and how he came about picking his cast members. Whilst some commentaries can be a little flat and contain too much back slapping, this commentary can certainly be classed as one of the most interesting around today on DVD. Matters are also helped by having a subtitled commentary track. This means that you can either enjoy the film with an audio commentary or opt to watch the film in all of its audio glory accompanied by the commentary subtitles.

If you thought that there was already enough material crammed onto the first disc then think again as there's thirty minutes of theatrical quality deleted scenes to go through. Some of fifteen deleted scenes, including an alternate ending which I'd have to disagree with Tony Scott and much prefer to the version used in the film, do have some merit, but given the length of the film the majority have been cut for pacing purposes or due to demands from the studio over the level of violence. Fortunately, rather being left to decide for yourself, Tony Scott is again on hand to provide an interesting audio commentary for each scene.

Things are then rounded off with an extremely brief Inside Look feature on the forthcoming release of the chiller Hide and Seek starring Robert De Niro and Dakota Fanning. However, stay alert and don't blink, as if you do you'll miss it. Still, even if you don't manage to blink you'll still be none the wiser about this film.

When the preview disc for Man on Fire dropped on my doormat I wasn't expecting too much from it. After all, I'd seen it advertised during it's cinematic release but not really heard anything about it. And, other than Training Day, considering that Denzel Washington's last few films have hardly raised much excitement I really wasn't looking forward to watching and reviewing this film. But that was before I learnt that Man on Fire was directed by acclaimed director Tony Scott who gave us the excellent True Romance and Enemy of the State. And what's more, never, ever, underestimate the shear acting brilliance of Denzel Washington as, without him, this film would be nothing. It's just a pity that given this films level of gratuitous violence, we won't be seeing him nominated for another well deserved Oscar.

So with Tony Scott in the director's chair and Denzel Washington in front of the camera, I was unexpectedly glued to the screen from start to finish. Even given it's rather slow introduction, the near two and half hour running time simply flashed by and left me wondering where the time had gone. Even a colleague who expressed an initial concern over the running time was so enthralled that, he too, was left wondering where all of the time went. Now if that's not a sure sign that you've got a cracker of a film on your hands, then I don't know what is.

The only real disappointment, if you can even call it as such, is that when Christopher Walken's name appears on the title credits you can automatically cast him as "the mental bad guy who finally gets his comeuppance". However, in Man on Fire his bad guy typecast couldn't be any further than the truth. In fact, it's all rather disappointing and a bit of a let down!

Man on Fire is a criminally underrated film and must surely be classed as one of the grittiest, and blood strewn, action thrillers of late. The direction and the cinematography from Scott is simply superb and even his simplest of touches had a major impact on the films presentation. You can definitely see his previous work on show here and I especially liked his ingenious use of clocks and subtitling at different positions, and in different styles, on the screen in a manner not to dissimilar to 24. It's so simple, but a stroke of genius. But that's not enough as the presentation of this DVD is nothing short of amazing. The menus are involving, the picture is stunning and given the length of the film there's even a fabulous set of Dolby Digital and DTS soundtrack squeezed in there too.

Even Quentin Tarantino loved this film, and if that's not enough of a worthy accolade, then nothing is. I'm still annoyed with myself that I skipped this one at the cinema. Just make sure you don't make the same mistake with the DVD. Rent or buy, Man on Fire is simply too good a film and disc to turn down.