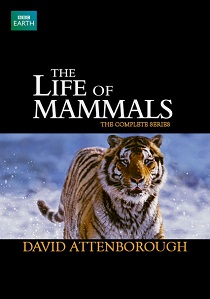 Sir David Attenborough's career in broadcasting spans a remarkable 50 years. It all began in 1952 when he joined the BBC Television Talks Department and in 1954 he launched the Zoo Quest series. This series took him to the wilder parts of the world and sowed the seeds of his future career in the natural world. It's also a little know fact that Sir David was also a controller of BBC2 and in 1952 he was responsible for the introduction of colour television into Britain.

But in 1973 the lure of the natural world meant that he gave up his desk job and returned to what he does best - programme making. He made a number of natural history series until in 1989 when he hit the "big time" with the 13-part series Life on Earth. At the time it was the most ambitious series ever produced by the BBC Natural History Unit and was watched by an estimated 500 million people worldwide. The sequel, The Living Planet, followed five years later whilst The Trials of Life completed the trilogy in 1990. Sir David Attenborough and the BBC Natural History Unit were firmly placed on the world map and that world expected more from this award winning team.

Along with other BBC projects, Sir David Attenborough's successes continued with Life in the Freezer, The Private Life of Plants, The Life of Birds, The Blue Planet and, bringing us up to the present date, The Life of Mammals. So sit back and watch the master at work as Sir David guides us through some of the 4,000 species of our furry, and not so furry, omnivore, herbivore and carnivore friends as they hunt for food, are in turn hunted by predators and go about that tricky subject of reproduction.

The series is split ten programmes with each one concentrating on a particular trait of the species. The first programme A Winning Design introduces us to the species whilst the second programme Insect Hunters concentrates on to the insect hunters, such as bats and ant eaters. The plant eaters are covered in the next two programmes Plant Predators and Chisellers whilst we get down to the nitty-gritty of the hunter and prey in the Meat Eaters. If you think this programme just concentrates on a pack of lions hunting Zebra's, then think again as there's some amazing footage of herds of animals fighting back when one of their members is attacked.

Thanks to humans and their wasteful lifestyles the Opportunists programme deals with the many animals which can adapt and take advantage of nearly every environment. The Return to Water programme looks at the mammals which have returned to the oceans and offers some interesting information about their land based past . Who said evolution was a load of rubbish? The final three programmes of Life in the Tree, Social Climbers and Food for Thought mainly concentrate on the most important mammals of all - primates. Watch in awe as these highly intelligent mammals go about problem solving and living in social groups and then question why we are hunting our closest relatives to the brink of extinction. Food for thought indeed.

With high definition television in Europe getting closer by the day many television studios are already producing shows in the high definition format. Not wanting to be left behind, and not forgetting that they have been at the forefront of almost all of the major broadcasting developments such as colour, teletext, FM, Nicam and more recently DAB, the BBC has been researching the HD format for many years.

And judging by quality of some of the images it looks like this series was recorded in HD whenever possible. However, with the current lack of a medium to broadcast this material recording, shows in this format may seem a little pointless. But choosing HD is not necessarily planning for the future but is ideal as a cost saving measure. Fortunately, a plus side to this is the fact that when the programming finally reaches DVD the quality is vastly improved over standard television broadcast material. You only have to watch some of the American television series on DVD, such as Friends, to see just what I mean.

And in general this vast improvement in image quality can be said of The Life of Mammals. This results in some truly stunning cinematography with so many rich colours and detail that you could almost reach out and touch the animal. From the beauty of the Tiger to the weirdness of the platypus, it's all there in stunning detail. However, things are not always so rosy as some scenes can be rather grainy to the point of being distracting. Ok, the night times scenes with the various night vision cameras can be an exception to the rule, but the extreme locations of the artic and desert can be a challenge not only to the camera equipment but the overall picture quality. This is a real shame as the images of the animals in their natural habitat are truly outstanding and in years to come some of these pictures are probably going to be the only way of remembering yet another extinct animal species.

With the series being primarily for terrestrial broadcast the sound department is going to be nothing special. However, with this being a documentary series there is little need for fancy surround effects. Our furry friends have no intention of taking up weapons and flying helicopters from channel to channel (well, perhaps not just yet) so all of the action takes place in the centre channel, with all of the talking done by Sir David. Never the less, the animals do manage to put on a show and whenever Sir David's travels take him into a rainforest the animals oblige with a symphony of squawking birds, buzzing insects and howling monkeys. It's just a pity that we couldn't hear it all in full blown Dolby Digital.

The four discs are presented in a pleasant foldout booklet with plenty of pictures of the animals in question along with a brief description of each episode in the series. The menus on each disc are animated with some wonderful images from the series and scored with the equally breathtaking music from the series. Once again, the BBC has produced a wonderful score to go with a wonderful series and you can find yourself just sitting and watching the menus whilst listening to the music. It's all so simple, but extremely effective.

The extras are contained on the remaining two discs of the series. If you managed to see the original UK broadcast, but didn't own the necessary digital equipment, you wouldn't have been able to access the interactive features. Fortunately, these short featurettes on the making of the series have been included in the package. There are Behind the Scenes features on how they want about filming the platypus, the elephants, the big cats, the cave bats, the grizzly bears and the forest canopies.

There's also a of Photo Gallery containing some impressive pictures, audio clips from the original score and a breathtaking ten minute Video to Music featurette with the stars of the series going about their daily lives accompanied by the programmes music score. I've already watched this feature more times than I can remember and it still manages to leave me with a grinning smile. And believe me, it takes a lot to make me smile.

The BBC, and in particular Sir David Attenborough, have consistently produced hundreds of high quality wildlife documentaries over the years. Indeed, these documentaries have even revealed previously unknown animal behaviour and even completely new species. And there's no doubting Attenborough's love of all animals. You only have to watch him come face to face with an animal and he'll produce such a beaming smile that even the Cheshire cat would have trouble beating. And as he smiles, you find yourself grinning and wishing you were there with him.

Quite how this series can be surpassed is going to be difficult, but I'm sure that the BBC wildlife team are already working on it. The series is thoroughly entertaining and is sure to enjoy repeat viewing as you gasp in awe at the wildlife on screen and marvel at the millions of years of evolution that produced it. If people want grumble at the cost of the license fee then they should be made to sit down and watch this series. This wildlife series is truly reference material for the entire family to enjoy.

The only sadness about this series is the usual tale of habitat destruction, hunting to near extinction and pollution. The series must spend seventy five percent of its time in one rain forest or another and proves just how rich and diverse these wonderful places are. So I'll finish with some food for thought and the series closing comments made by Sir David.