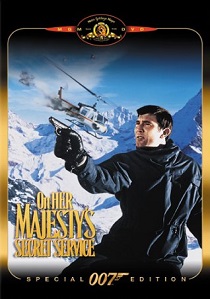 Whilst Bond is on leave, and trying to avoid the constant pestering by MI5, he prevents a young woman from committing suicide in the ocean. Her father, Marc-Ange Draco, is the head of one of the biggest and most powerful crime syndicates in the world. He is so impressed by Bond's actions that he wants him to protect his daughter forever by marrying her.

Turning down an offer of £1 million, Bond demands that in turn for marrying his daughter Draco gives him information on the present location of the evil Blofeld. At first Bond agrees to the deal simply to track down and kill Blofeld but soon finds himself falling in love with Tracy. However, he soon learns that Blofeld plans to unleash a deadly virus on the world by brainwashing 12 young ladies into carrying, and delivering, the virus in their makeup kit.

Yet again MGM have outdone themselves with another superb digitally re-mastered picture. There is no artifacting or outlining and it has a high average bit-rate through the film. Only the occasional dust speck and whisker gives the age of the film stock away. The quality of the print is highlighted with the many alpine scenes, and superb camera work, which no Bond film has ever managed to surpass.

Again, the major disappointment with this film is the sound as it is only presented in mono. It would have really benefited from a re-mastered 5.1 soundtrack, but since the majority of the film is dialogued based it doesn't distract you from the film too much, although the avalanche scene would have been brilliant in 5.1

As usual MGM have outdone themselves with the extras. Although we are becoming more and more blasé about the extras on each new disc, I find that out of all of the extras the Documentaries{i/} are always the most interesting, and indeed the one on this disc removed a few of the misconceptions I had about both this film and George Lazenby.

When Sean Connery announced that You Only Live Twice was to be his last film many people, producers included, thought it would be the end of the Bond franchise. However, the producers pinned their hopes on a complete novice actor in the form of George Lazenby and he makes his only appearance knowing that he had big pair of shoes to fill. For all the criticism he received, he does actually pull it off quite well. It was just a pity he wasn't given the chance at another film.

This film has divided many Bond fans, but it features some of the most dazzling film sequences, stunts and scenery to date, and all without the need of fancy gadgets and explosions. Ok, so the main plot takes a long time to get going, but the alpine scenery, and along with a wonderful picture transfer make this wonderful addition to your DVD collection.