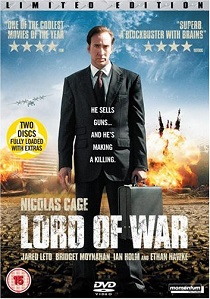 Yuri Orlov is a young Ukrainian immigrant living in Brooklyn who is seeking his part of the great American Dream. Whilst his family scrape out a living in the restaurant trade, a brief encounter with the Russian mafia, a gangland style murder and an Uzi gives him a great idea to make some money. Yuri is a natural salesman and this event triggers a brilliant arms dealing career which spans 25 years and is made all the better by the collapse of the Soviet Union and the selling off of the massive stockpiled arsenal of post-Cold War Ukrainian weapons. Want an Uzi, a tank or helicopter gunship? Well, thanks to Yuri's contacts, he's your man, and along with his brother Vitaly, he's doing very well out of it thank you very much. Yuri even manages to find the time to bag the ultimate trophy wife in the form of super-model Ava Fontaine Orlov.

However, in order to make a profit, you need a market in order to sell your goods. And it helps that if that market is having a bit of an unfortunate skirmish with it's neighbouring country or ethic group. And in most instances that market is based in the developing countries, resulting in one of Yuri's best clients being the sadistic African dictator Andre Baptiste. At first Yuri manages to keep his conscience by considering each of the conflict zones he visits as none of their business, but his brother Vitaly is struggling, and after an arms deal is paid for in drugs he becomes addicted. Leaving him with no other choice, Yuri has his brother committed so he can continue with his trade whilst Vitaly recovers.

But running weapons into war zones is not an easy job, especially when the UN has past a resolution to ban sales of weapons to certain nations. So it's simply left up to Yuri to come up the ways and means to bypass the rules. Never the less, Yuri doesn't have it all his own way as Interpol agent Jack Valentine is determined to bring Uri and his friends down. Jack knows that Uri is running weapons of just about every conceivable type and the pair are constantly having run ins. But Yuri knows the rules and the many loop holes down to the last letter and he's forever in the clear. However, surely it can't be too long before Yuri finally develops his conscience or Jack finally uncovers some evidence that sticks. Still, it's surprising just how much help a man can get, and from the most unlikely of places.

The picture is bright and colourful with a good level of detail and colour depth throughout. However, the film was produced using a number of colour filters which results in certain scenes looking much better than others. Never the less, you cannot fail to be impressed by the bright and oppressive colours of the African desert and the dark and sullen colours of the Ukraine. With some excellent black levels and good flesh tones it's all extremely impressive, if only let down slightly by the presence of grain and too much contrast on some of the brightly lit interior scenes.

The 448 Kbps Dolby Digital 5.1 soundtrack is actually a bit of a disappointment with very little to get excited about. Although there is the occasional use of the surround channels, with bullets and explosions ricocheting nicely around the soundstage, the majority of the action is to be found firmly locked in the centre channel with both Nicolas Cage's voice over along with the general dialogue. The front stereo channels are occasionally used to offer some directional effects, but on the whole it's a film where the dialogue literally takes centre stage.

The menus on both discs are imaginably animated with the first disc containing a bullet production line similar to the opening scenes of the film whilst there's some good transition effects between the various sub-menus. With the film running at just under two hours the extras have been pushed onto a supplementary disc, leaving just the Directors Commentary on the main film disc. But before you even get to the menus you have to endure the usual anti-piracy video and number of trailers for other films (what's wrong with an additional menu?) and a rather interesting "introduction" selling arms in a similar manner to a shopping channel. It's a bit confusing at first, but it helps to progress the message from the film. However, unlike the annoying advert for Mars Bars, you can at least skip through them.

The main extra on the film disc is the Audio Commentary from director Andrew Niccol. Whilst a lot of the information is repeated in the numerous Making of features on the second disc, it's an interesting and informative listen as he talks about the usual production problems and their day to day dealings with the real people behind the arms trade. And given that Nicolas Cage decided to muscle in on the proceedings and take up a co-producer role on the film, it would have been a rather interesting commentary track if he'd found the time to add his own thoughts too.

The twenty minute Making of Lord of the War featurette goes behind the scenes and looks at a number of elements from the film, from the landing of the cargo plane to a vulture pecking at an unfortunate extra who was told to remain perfectly still (and dead like). They even reveal that they bought hundreds of guns off a real arms dealer (they were actually cheaper than making fakes) and then sold them back cheaply, plus the row of Russian tanks on display were equally real and had just been sold to Libya. Needless to say, it was a bit of an eye opener all round and quite surprising that they could even film such things. The fifteen minute Making A Killing : Inside The International Arms Trade featurette looks at the weird and wonderful world of the arms trade. There's the usual collection of concerned people talking about the problems of illegal gun running into Africa and the easy availability of weapons, but then there's the bizarre description of an actual arm fair which is essentially like a motor show, but where you buy things to kill people with.

The ten minutes worth of time coded and chaptered Deleted Scenes are of interest and they do add some extra to the film. It's not very often I say this, but these deleted scenes were certainly interesting and are definitely worthy of a look in. Next up are fifteen minutes worth of Interviews with the director and the majority of the cast. Nicolas Cage is also interviewed separately in a seven minute interview recorded during the films promotional tour. Things are rounded off with the Theatrical Trailer. All in all, a good collection of extras which have the added bonus of being placed on a second disc without affecting the overall image quality. It's just a pity that neither the audio commentary or any of the extras have subtitle tracks.

It's easy to see why Lord of War did very little to excite cinema going audiences, especially in America, with box office takings no where near the estimated budget of the film. I don't even remember seeing a theatrical release in the United Kingdom. Yeap, it's one of those famous thinker films that I keep going on about on a weekly basis. Unfortunately, people want to go out and be entertained and they'd rather not be dictated too in some sort of political manner. But in the case here, it's not really something you can ignore and expect the problem to simply to go away. And because of that, and along with yet another superb performance from Nicholas Cage who can do no wrong, this release of Lord of War will find its way into many a DVD collection.

Lord of War is a film which is based on actual events and it makes uncomfortable viewing as the subject matter is completely accurate and after reading the script Nicholas Cage spotted the potential, even co-producing the film. As a black comedy, it's so off the scale and not the sort of film you can sit down with the lads, or even the lady, and enjoy as an evenings fun packed entertainment. But a must viewing it is, as only at the end of the film will you finally understand the message it is trying to put across.

And that message? As Africa continues to tare itself apart whilst the U.N. sits idly by, pontificating at a safe distance, private gunrunners continue to thrive. The world's biggest arms dealers are the United States, United Kingdom, Russia, France and China. They are also the five permanent members of the U.N. security council. Makes you think doesn't it?

Rental or purchase, Lord or War is a cracker of a film and as a two disc set, it's a bit of bargain too. It's just a pity that the featurettes and interviews on the extras disc don't contain a subtitle track for the hard of hearing. Never the less, highly recommended.