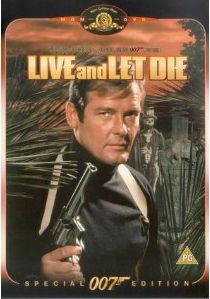 Whilst investigating a drugs smuggling operation in America several British agents are killed in mysterious circumstances. With each of the murders being linked to Harlem crime boss Mr. Big and Caribbean diplomat Katanga, Bond is sent in to investigate.

When Bond arrives in New York he is soon offered some hospitality by one of Mr. Big's henchmen. However, the failed attempt on his life gives Bond a valuable lead and he soon discovers a plot to flood the US main land with a billion dollars worth of heroin.

The picture is a bit of a mixed bag. Although it still offers an above average bit-rate, with a crisp and detailed picture, the first ten minutes of the film are just horrendous. The picture is full of dust specks and whiskers which gave the impression that the film had been stored down the back of someone's sofa. However, these imperfections mysteriously clear-up and the rest of the film becomes quite clean with only the occasional dust speck.

Yet again, the major disappointment with this film is the mono sound track. With all of the action and chases it would have really benefited from a re-mastered 5.1 soundtrack. With all of the resources available to MGM I'm sure they could have managed to produce a re-mastered 5.1 soundtrack. The only thing that is in stereo is the MGM logo, pity they couldn't extend it to the film.

MGM have managed to dig up plenty of interesting extras, with the documentaries still being of particular interest. There is also a wonderfully animated menu system, and let's not forget that wonderful soundtrack performed by Paul McCartney and Wings which received an Oscar nomination.

Although this is an enjoyable Bond film, with plenty of wonderful one liners from Roger Moore, it seemed to descend into nothing more than an action comedy - a far cry from the Connery days. There was the pointless ten minute boat chase with Sheriff Pepper in pursuit and the rather lame bad guy who is certainly not of the same calibre of Goldfinger or Ernst Blofeld. However, Kanaga's hench man Tee Hee showed promise as the predecessor to the best henchman of all - Jaws.

Unlike the previous Bond films, which were also encoded with region 4, this disc is only encoded as region 2.