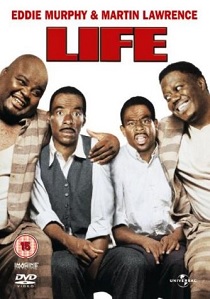 Claude Banks is inadvertently teamed up with Rayford Gibson when he is unable to pay a bill at a New York bar after being paid a visit by some money lenders seeking payment. Matters aren't helped when Claude has his pockets picked by Rayford who then tries to pay off the bar owner with Claude's, now empty, wallet.

Forced to make some money to pay off their debts they make a bootlegging run to Mississippi. Loaded with their cargo, and ready to return to New York, they explore a local bar only for Rayford to loose all of their money, and his fathers watch, in a fixed poker game. Sensing a rat the pair pursue the poker player only to discover that he has been murdered and the blame squarely placed on them.

Naturally, they are found guilty of murder and sentenced to life imprisonment for a crime they didn't commit and the pair spend the next sixty years bickering but in reality appreciating each others friendship. As the pair are educated they can read and Rayford is tasked with reading the inmates letters. There is one particular amusing scene when he reads about the death of every member of an inmates family, even down to the family dog. Each pinnacle point in America's recent history, such as the second world war and the moon landings, are shown to highlight the aging process.

Both the picture and sound are excellent. The picture is sharp and crisp with no artifacting or outlining throughout. Although the surround channels are not overworked, there are plenty of atmospheric sounds and catchy jazzy music to keep you alert and the channel separation is spot on with no bleeding from the dialogue channel. The directors commentary is also well worth a listen.

As the story is told over sixty years the pair obviously have to age. This is where the remarkable make-up comes into the play. Murphy is use to changing his appearance with vast amounts of latex, especially with The Nutty Professor and Coming to America, but the realistic make-up by Rick Baker is remarkable. The pair manage to put on weight in all the right places and even the thinning hair is convincing, although the illusion is spoilt slightly by Murphy's familiar "old man" accent.

Since Bad Boys launched Will Smith into the big time Martin Lawrence has been the forgotten man. However with a spate of recent good films Martin is starting to get the attention he deserves. He and Murphy work well together and you only have to view the outtakes to see that the pair obviously enjoyed both the project and each others company.

Murphy doesn't even have to break into a sweat to produce a comedy which, to be honest, is not hilarious but has a more delicate frame of humour to it. However, don't let this put you off a really entertaining film which basically takes a swipe at the bigotry the black people suffered during 30's America. There is a classic scene in a Mississippi diner when the pair attempt to purchase some pie only to be refused due to the colour of their skin. Lawrence's exasperated attempts to buy the pie made me laugh and, at the same time, infuriated me that they could have been treated this way.