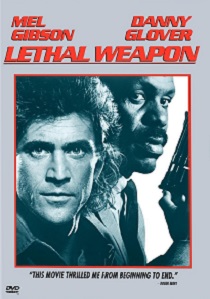 Martin Riggs is no ordinary cop. He's a human killing machine and a cop on the edge who has never got over the death of his wife. As he borders on the edge of suicide his reckless tendencies make him a fearsome opponent for anyone who works against, or with, him.

Roger Murtaugh has just turned 50 and is an easygoing homicide detective with a loving family, a big house and a pension just waiting for him. Needless to say he is not happy to learn that his new partner is a guy with nothing left to lose.

Whilst Murtaugh is investigating the apparent suicide of a woman he realises that the victim is the daughter of an old friend. After Murtaugh discovers that the woman was poisoned before jumping off a building, the father starts demanding that Murtaugh finds the people who murdered his daughter and kill them.

As the pair investigate the murder they uncover a ruthless international drug baron, and ex-Vietnam special forces, called "The General" and he'll stop at nothing to stop Riggs and Murtaugh shutting down his operations. As the bullets fly and the bombs explode the pair, who could not have been further apart, soon become the idea partners and a formidable team against the drug barons vicious team of mercenaries.

The picture can be sharp and detailed with no signs of artifacting. However, it can also be grainy with too much contrast and the print is starting to show its age, along with those haircuts! The sound is not the best of the film series, it was made way back in 1987, but there are plenty of bullets and explosions to keep the action fans happy.

This film is the start of a successful, and profitable, partnership and it should be added to everyone's collection, although you should consider the newer directors cut. Lethal Weapon is one of the best cop buddy films ever made which many have tried to copy but failed. However, there is only one other film which has copied this formula and gone one better, and that is Lethal Weapon 2.