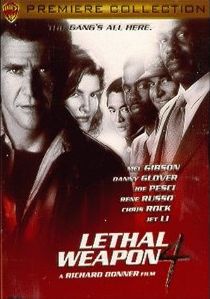 ReviewCrimeAdventure
Review Article Go back to homepage
The duo are back yet again and this time they are battling to stop the Chinese Triads from importing illegal immigrants. However, this time they have another member on the team, Lee Butters, who has a big secret he's hiding from Roger.
Mel Gibson, Danny Glover, Joe Pesci, Rene Russo, Chris Rock, Jet Li, Steve Kahan, Kim Chan, Darlene Love, Traci Wolfe, Eddy Ko
Action/Adventure, Crime
1
2 Hours 7 Minutes
Thank you for supporting DVD365.net when you order using the link(s) below.
Buy DVD
Story

Things have certainly changed in the world of Murtaugh and Riggs. Murtaugh has learnt that Lorna is pregnant and he is pondering over whether to do the decent thing, but the death of his first wife still haunts him. Even Murtaugh is in for a shock when he discovers that his daughter Rianne is also expecting, unfortunately he is unaware of the identity of the father and it is someone he is least expecting.

One evening Roger is on his on his fishing boat relaxing with Martin and Leo when a cargo ship comes careering out of the night with guns blazing on deck. Riggs and Murtaugh are soon back in action fighting Chinese Triads smuggling illegal immigrants into the country. Murtaugh rescues some of the immigrants and puts them up in his house, but unfortunately for Murtaugh one of the group is needed by the Triads and they soon come looking for him.

There is more to the illegal smuggling operation than meets the eye. Uncle Benny, a Chinatown mob boss, has imported the immigrants to use as modern day slaves to pay for an artist to create counterfeit Chinese currency. They plan to use the counterfeit money to buy back the heads of the Triads, the Four Fathers, from the Chinese military.

The picture is sharp with rich and vibrant colours, especially in the early parts of the film with the night scenes being particularly excellent. Although the bit-rate is only average, the picture doesn't suffer from outlines or artifacting, although there is one bizarre scene after twenty fives minutes at Riggs's trailer where the picture is extremely poor. It is refreshing to see such a good picture after being disappointed with the quality of the other films in the series.

At last, a lethal weapon film with an excellent soundtrack. The bullets ricochet wonderfully around the soundstage and the numerous explosions boom with a satisfying LFE thud. Again the haunting saxophone is used to good effect and the dialogue is locked in centre channel without any bleeding to the other channels. It is truly a remarkable film with the first twenty minutes of the film being a marvellous sound demonstration for anyone wishing to show off their system.

One of the most pleasing things about this disc are the extras. Although the menu is scored, but static and a little clumsy to follow, there is a set of additional footage from each of the first three films plus and interesting making of documentary. The best additional footage was from the first Lethal Weapon film where Riggs comes up against a school yard sniper and we can see how truly on the edge he is. What is more interesting is that I thought the picture quality of the additional footage was actually better than on the original films reviewed - better mastering on this disc perhaps?

I'm sure this is the final outing for the team of Riggs and Murtaugh and it goes out on a high with the action in full flow with just the right amount of comedy. Joe Pesci is at his best as the annoying, but lovable Leo, Chris Rock is a breath of fresh air with his unique comic timing and Jet Li is impressively nasty. Even the Audio Commentary from Richard Doner is interesting, if a little boring after a while.

Just remember, if you're ever looking to buy a house in America and it just happens to be owned by a certain Roger Murtaugh then make sure you walk right on by as over the years it has been smashed up, blown up and burnt up!