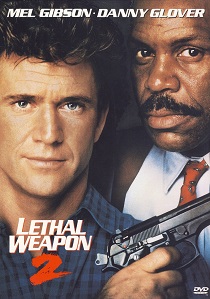 ReviewCrimeAdventure
Review Article Go back to homepage
Riggs and Murtaugh are back in an all action sequel. Together they must battle a group of corrupt South African officials who hide behind their diplomatic immunity to sell drugs and launder money.
Mel Gibson, Danny Glover, Joe Pesci, Joss Ackland, Derrick O'Connor, Patsy Kensit, Darlene Love, Traci Wolfe, Steve Kahan, Mark Rolston
Action/Adventure, Crime
1
1 Hour 54 Minutes
Thank you for supporting DVD365.net when you order using the link(s) below.
Buy DVD
Story

Riggs are Murtaugh have been assigned to 'baby sit' an accountant, Leo Getz, who has been laundering billions of dollars of drug money and is about to testify against a group of smugglers. Naturally, they are not happy and fail in an attempt to murder him, along with Riggs and Murtaugh, in his hotel room.

Hungry for revenge, the pair set out to find a house where Leo use to meet with the couriers to pick up money for laundering. However, when they finally find the house they discover that they are dealing with a corrupt group of South African officials who are using their diplomatic credentials to go about their evil business.

The picture and sound quality of this disc is only average. There are no visible signs of artifacting and the bit-rate is reasonably high, but the graininess and imperfections in the picture disappoint. It is hard to believe that this film is over ten years old, with only a younger looking Gibson giving it away, but it is probably the age of the film stock which causes the majority of the picture problems.

The re-mastered 5.1 soundtrack is also disappointing. Although there is some use of the rear channels and the occasional LFE, most of the sound is directed through the centre channel. I was very disappointed. I've also heard that the DTS version of this film is also a bit of let down.

Picture and sound complaints aside, this film is really quite entertaining with plenty of subtle one-liners to raise a chuckle. There's plenty more explosions, car chases and comedy, including an exploding toilet, to keep the action fan happy and it is a vast improvement over the previous film. The chemistry between Gibson and Glover continues to work well as their partnership develops from the previous film, plus the introduction of funny man Joe Pesci is the ace in the pack. From the moment the end credits roll you knew a sequel would just have to follow.