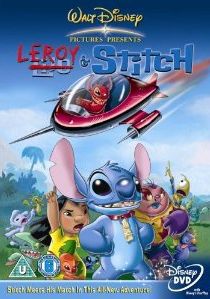 The story picks up from the end of the first, with Jumba, Pleakley, Lilo and Stitch being rewarded for containing all of Jumba's 625 experiments. Dr. Jumba is rewarded by being given the keys back to his laboratory, Pleakley is rewarded by being given the Earth expert position at the much regarded Galactic Alliance Community College whilst Stitch is to become the Captain of the Galactic Armada and the BRB (Literally meaning the "Big Red Battleship" - I like when aliens decide to keep things nice and simple).

Whilst they are all happy with their rewards, Lilo is upset that they don't want to return to earth with her. So, friends being friends, they all decide to decline their rewards and return to earth with Lilo. But it's not long before Lilo sees that her friends belong back in their own world - and in their new positions. So Jumba, Pleakley and Stitch say their final goodbyes and head back home - leaving Lilo in charge of Stitch's 625 happy cousins.

But the Hawaiian peace and quiet doesn't remain for long as Captain Gantu breaks the evil Dr. Hämsterviel out of prison. Taking over Dr. Jumba's laboratory, Dr. Hämsterviel reveals a new and dastardly plot to take over the world by creating Leroy, the evil twin of Stitch, and cloning him into an entire unbeatable army. But before he can do so, the 625 other experiments must be captured and destroyed. That sounds like a job for Leroy.

It looks like some old friends must join together once more to defeat Dr. Hämsterviel's army, but this time they have the help from all of Stitch's cousins, some inspiration from Elvis, help from some unexpected quarters and some of that good old aloha spirit. Can good prevail once more? Well, it is a Disney film...

Being an animated film there's a huge range of rich and vibrant colours on show - even more so considering this is a bonkers Hawaii based Disney film with more strange characters than you can shake a Bambi at. Also, being a direct to video affair, Disney could have simply cut corners and produced something far cheaper looking. However, whilst there's no denying that the standard of the animation isn't as good as a theatrical release, the transfer is perfect without a hint of print damage, picture noise or pixelisation. It's even more surprising to find that the picture is an anamorphic widescreen presentation too.

As with the surprisingly good quality of the picture transfer, the 384 Kbps Dolby Digital 5.1 soundtrack is just as effective and impressive. The dialogue is crisp and clear in the centre channel while the front stereo channels offer some good stereo steerage - especially during the later half of the film. Even the rear channels get in on the act, providing the occasional sound effect and enhancement to the musical score.

The menu is scored and pleasantly animated with the main menu containing a number of excited Leroys jumping and running around the screen. The disc also includes Disney's Fast Play feature that automatically plays a number of trailers, the film then a selection of extras. I'm not quite sure of the purpose of this, after all things could be speeded up if it weren't for the hundreds of copyright messages, various company logos and advertisements for the animated editions of Peter Pan and The Fox and the Hound 2 at the beginning of the disc. But then again, short of bribery and the threat of no television for a week, anything to keep the kids quiet for an extra few seconds must be a welcome bonus.

Extras wise, it's all a little on the light side - and rather unusual for a Disney title. However, there is something to keep the diehard fans of the series happy, with the inclusion of a twenty minute Never-Before-Seen Episode from the Lilo & Stitch television series. Never the less, whilst it may well be an exclusive extra for the disc, you'd have to be rather cynical not to believe that an expensive peace of animation such as this won't end up being shown on television at some point in the future.

Finally, no Disney disc would be complete without the addition of some sort of game or activity for the little ones to fight over. In this instance, it is the rather unchallenging The Red Battleship Flight Simulator game. In it, you take the controls of Stitch's fancy new space ship and simply use the up, down, left and right keys on the remote to avoid crashing into various bits of space debris. In theory, it's not hard to play, but in practice the unresponsive remote makes it extremely annoying to complete. Still, it'll probably keep the kids quiet for five minutes before they get bored with it.

Along with the theatrically released Lilo & Stitch, Disney has successfully tapped into the younger end of the Manga market. With children brought up with the weird and wonderful Japanese imports such as Pokémon, Disney have managed to create a set of characters that are more in line to their natural American market. Mind you, it's still completely and utterly different to their other recent animated output. But bonkers or not, even amongst all this madness and mayhem, Disney still manages to provide a touching story about friendship.

For those people who've never seen the original Lilo & Stitch (and that would include me then) the start of the film contains a brief, but extremely handy, synopsis of what happened in their previous adventures. However, the simplest thing I can come up with to surmise this Leroy & Stitch disc is that it is completely and utterly bonkers - but completely and utterly mesmerising viewing at the same time. Whilst the kids are sure to enjoy the increasingly bizarre (and quite frankly - straight over my head - goings on) there's plenty of one liners that'll have the more mature audience chuckling to themselves - which is all the more better considering this film was never released theatrically. I lost count at the number of times I laughed out loud - which is always a good indicator when writing a review of an uncharted film such as this.

Leroy & Stitch is superb uncomplicated (except for the adults!) and safe family entertainment. It's just a pity that the extras a little on the sparse side - although collectors will be more than happy with the exclusive Lilo & Stitch episode. Highly recommended.