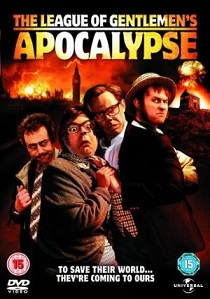 The League Of Gentlemen's Apocalypse (2005)

ReviewComedyFantasyAdventure
Review Article Go back to homepage
Royston Vasey and its strange inhabitants are facing apocalypse, and the only way to avert disaster is for a small rescue party to find a way into the real world to confront the writers plotting their demise.
Mark Gatiss, Steve Pemberton, Reece Shearsmith, Michael Sheen, David Warner, Bernard Hill, Victoria Wood
Comedy, Action/Adventure, Fantasy
2
1 Hour 27 Minutes
Thank you for supporting DVD365.net when you order using the link(s) below.
Buy DVD
Story

All is not well in Rosyton Vasey, dark menacing skies loom over the town, there's an over excited Giraffe, the Towns Statue loses an arm and that is just the beginning, well actually it spells the end for Royston Vasey and all who live there. The Reverend Bernice is explaining to Pauline and Mr. Chinnery in the basement of the church the events taking place outside and the implications they hold for them all, the end of their world. Bernice shows them a doorway to another universe, which will lead them into another universe, but before they can enter, dodgy Butcher Hillary Briss, Creepy Herr Lipp and the obnoxious Geoff dash in and lock the door behind them.

When they re-emerge from the locked door, things are not quite right. Geoff returns to his flat to find an Asian family there. The signs say Hadfield not Royston Vasey. A bunch of people dressed like Herr Lipp walking the streets uttering his catchphrase 'Alles klar'. The name above the Butcher's is not Hillary Briss, things are not right. The sinister Papa Lazarou appears and takes them to the bizarre Tubbs and Edward for an explanation of what is going on. Edward, Tubbs and Papa Lazarou give them the startling news that they are all just the creations of four writers and if they do not write about them they will not exist. Hilary, Herr Lip and Geoff are dispatched off to London to confront the writers and make them write more about them.

Once in London they track the writers down and steal a computer that the writers have been working at, in the hope that they are writing some new Royston Vasey stories. While they do this they take Steve hostage and Herr Lipp assumes Steves role of family man. Holed up in a hotel room Hilary and Geoff set up the computer and look at what has been written while Steve is tied up in the bath. What they find is not Royston Vasey but London 1690 and a creature called a Homunculus. When Steve makes an escape Hilary orders Geoff, who is quite enjoying the read, to delete the file, which he of course ignores. The scene then changes to 17th century Britain and things get very strange indeed, especially as Geoff writes himself into the unfolding story, with amusing results.

The picture is bright and colourful with a good level of detail throughout. Black levels are surprisingly good with little or no signs of artifacting or outlining. Given that this is such a recent theatrical release the transfer is excellent and there are no signs of dust scratches or other forms of print damage. Whilst the television series relied on bits of cheap makeup and a few handily placed signs in Hadfield, The League Of Gentlemen's Apocalypse has a vastly superior budget for both the costumes and makeup, and there's even some rather good special effects thrown in for good measure too. Still, it doesn't look quite as good as a major Hollywood blockbuster, and as the filmmakers couldn't afford to shoot on 35mm they opted for High Definition video instead. And on the whole, it all looks good with the various characters brought to life with even more disturbing reality.

The Dolby Digital 448 Kbps soundtrack is surprisingly effective with the musical and ambient effects taking centre stage in both the surround and front stereo channels. The dialogue is crisp and clear in the centre channel whilst the more dramatic scenes, such as the initial weather and explosive effects, manage to bring the LFE channel to life. It's certainly a change from the soundtrack normally associated with a standard, and typical low budget production, which is broadcast in NICAM stereo on BBC2. Whilst the likes of the BBC and ITV are never likely to be able to compete with the big American networks, I'm sure that in the near future home grown HDTV television programmes will sound just as good as this without having to venture to the cinema or local DVD store.

The menu is a lavish animated affair and dramatically scored with some nice effects when a selection is made. It would not be out of place on a Hollywood action, adventure blockbuster and it quite possibly took up half the budget for the DVD production. The extras are pretty much a standard affair with a making of and a video diary being the most interesting, whilst there's a few Easter eggs to be found along the way too.

The main extra is the Audio commentary with Steve Pemberton, Jeremy Dyson, Reece Shearsmith and Mark Gatiss. The commentary is better than most DVD commentaries and the guys obviously get along well and they provide plenty of information on the various locations, shooting the film, the in jokes, bloopers that you may not have spotted and their various ideas for the script. Fortunately, the commentary track is also subtitled so you can opt to watch the main film in its full 5.1 glory and read the commentary track on screen at the same time.

The twelve minute The Making of The League of Gentlemen's Apocalypse featurettes contains the usual pat on the back interviews, but there's plenty of behind the scenes footage of the filming in Ireland plus some on set and studio interviews with the cast members. There's also a small look at the special effects, including Steve's exploding head moment. Next up is the five minute The Real Royston Vasey featurette which looks at the real town of Hadfield where the series and a very small part of the film was made. Introduced by Pauline, the 'gents' explain the reasons why they decided to set the series in Hadfield, whilst there's a few interviews with the real locals who explain just how they've made a bob or two thanks to the programme. Also, with it being down the road from where I live it's interesting to see the places you know on a DVD!

In the four minute A Cast of Thousands featurette the actors talk about their various characters in the film and how they constantly had to change between roles. They also reveal that when they have to swap between two or three roles a day, with different dialogue to go with it, it was quite a tricky task to both get into character and get the makeup done in time. Following on from the previous featurette is the interesting twelve minute A Gentlemen's Diary by Steve Pemberton which follows, rather unsurprisingly, Steven Pemberton as he makes a video diary for a day on location. Starting off at 8am with a shower and breakfast, Steve has to film three characters in the day and it shows him in make-up (numerous times), waiting around on set and actually getting down to the hard work of doing some filming. There's also the handy video time and date stamp to give you an idea just how long their working day lasts with the final action of the day, or rather lack of, finishing at 10pm.

Next up are sixteen minutes worth of Deleted Scenes. Unfortunately, whilst the other extras have plenty of input from the cast there is no information here as to why the scenes were deleted from the film. However, the majority appear to be simple extensions to existing scenes and, as with most cases, they were most probably cut for pacing and timing purposes. There's also no way of selecting an individual scene and you have to watch them all in one go, although they are chaptered and subtitled. There's then ten minutes worth of unfunny Outtakes, although Steve's trouble escaping from the shower was reasonably amusing. Things are rounded off with an automatically advancing gallery of production stills with cheesy music, the Teaser trailer and finally Theatrical Trailer. All in all, it's a good collection of extras that fans of Royston Vasey are sure to enjoy.

The League Of Gentlemen's big screen debut is a quite a change from the TV series and may not sit well with fans expecting to see their favourite characters and strange antics for 90 minutes. As it happens most of the action takes place outside of the fictional town of Royston Vasey. In fact, thanks to some handy tax breaks, most of it was shot in Ireland.

Amongst the usual cast is the actor David Warner (Straw Dogs, The Omen, Time After Time, The Man With Two Brains, Scream 2, Titanic), who clearly loved hamming it up in his role of Dr Erasmus Pea. Fans of the Star Trek films will recognise him. It's just a shame that he was not interviewed in the extras as I am a fan of his and would liked to have known if he was a fan of the show. Peter Kay and Simon Pegg also make a brief cameo appearance, although if you blink then you'll miss them. Still, I'm sure you will spot Peter Kay the moment he opens his mouth.

If you do not like the show then I expect you will give this a miss too which is understandable, but fans of the show will appreciate it, perhaps a little disappointed that their particular character did not get any screen time. While it is quite different to what we love about the TV series it does retain that League Of Gentlemen feel to it where the humour is concerned. I quite enjoyed it once I realised it was not going to be merely a long episode of the show. Definitely one for fans only.