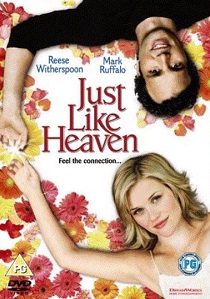 ReviewComedyRomance
Review Article Go back to homepage
A lonely landscape architect falls for the spirit of beautiful woman who used to live in his new apartment and together they decide to find out why she is haunting the apartment.
Reese Witherspoon, Mark Ruffalo, Donal Logue, Dina Spybey, Ben Shenkman, Jon Heder, Ivana Milicevic, Caroline Aaron, Rosalind Chao
Comedy, Romance
2
1 Hour 30 Minutes
Thank you for supporting DVD365.net when you order using the link(s) below.
Buy DVD
Story

Elizabeth Masterson is an ambitious young junior doctor who's determined to get taken on at the end of her internship. She regularly puts in 20 hour plus shifts and totally lives for her job. Even her work mates don't know what she does outside of work and tend to exclude her from whatever they are doing - knowing full well she won't have come along anyway. Surviving on disgusting looking coffee she has little time for relationships, so when her happily married sister Abby finally succeeds in setting up a blind date for her sister, Elizabeth finishes her shift and heads home. Unfortunately, she doesn't make it, driving her car headfirst into a large truck.

When lonely landscape designer David Abbott rents a new apartment in San Francisco, the last thing he wanted was company during his beer soaked evenings in front of the television. So when Elizabeth shows up, insisting the apartment, and all of its contents, are hers he begins to think he's been involved in some sort of rental fraud. But when she then disappears without a trace he becomes convinced that his apartment has been invaded by some sort nutter so he decides to change all of the locks. Never the less, she reappears to complain about his presence in her apartment, even threatening to call the police.

Still puzzled as to how she got into his newly secured apartment, all becomes clear when she walks right through a table. Now convinced that she is a ghost, David tries to help Elizabeth cross over and "go into the light". However, Elizabeth is not going to go quietly and she refuses to believe that she is dead. As a result, David resorts to all sorts of cleansing methods from a priest performing an exorcism to hiring some strange Ghostbusters types. As none of these methods appear to work, David relents whilst Elizabeth finally decides that she's actually not the person she thought she was. So the pair decide to search for the truth and to uncover just what happened to her. But as they delve deeper, they find that their constant squabbling and complete opposites start to attract and they become more and more attached to each other.

The picture is bright and colourful with a good level of detail and some good black levels throughout. However, the apparently deliberate over saturation of the colours does cause some problems which results in some edge enhancements and an annoying amount of grain, especially when there's plenty of red on screen. You only have to watch the opening scenes and its large amount of red and other bright colours to see what problems are in store during the film. Never the less, given its a relatively new release, there are no problems to report with print damage and the transfer is a clean one.

The Dolby Digital 448 Kbps 5.1 is nothing spectacular with a surround channel that remains fairly quiet throughout. Still, it does occasionally announce its presence like an errant ghost whenever the rather catchy musical score kicks into life. And, if anything, the best sounding part of the film is the opening twenty or thirty seconds of the films dream sequence. Dialogue wise, everything is clear and precise in the centre channel whilst there's some reasonable use, again by the music score, of the front stereo channels. There was also a distinct lack of activity in the LFE channel too, although like the rest of the under worked channels, the genre of film didn't really call for anything drastic in the sound department.

The menu system is partially animated and scored with the menus clearly laid out and easy to navigate through. Extras wise, there's a good selection on offer and each featurette is accompanied by optional subtitle tracks. It also appears to be a collection of extras that consists of far more than you'd expect to find for a film of this genre. Never the less, given the target audience here, I'm sure that majority of the features will go over most people's heads and be left unexplored.

The main extra is Filmmaker Commentary with director Mark Waters, editor Bruce Green, and director of photography Daryn Okada. It's a reasonable affair, with plenty of information on the film's production. However, it's not the most engaging of yack tracks and their fairly boring tones make it hard going at times. It's definitely a track for film fans only, although you could always resort to the subtitled version if it gets too much for you.

Next up is the fifteen minute Making of Just Like Heaven featurette. In it, and accompanied by plenty of clips from the film, director Mark Waters, Reese Witherspoon, Mark Ruffalo along with some of the other cast and crew members discuss their characters and the film locations in and around San Francisco. Still, there's nothing really of note here and it's simply your usual self promotional guff. Following on is the thirteen minute Meet the Cast featurette. Again, with plenty of all round back slapping and film clips, Reese Witherspoon, Mark Ruffalo, Dina Waters, Donal Logue, Jon Heder, Ivana Milicevic and Ben Shenkman are on hand to provide the interviews whilst director Mark Waters and producers Walter Parkes and Laurie McDonald offer some insight into their casting choice.

Next up are a number of Deleted Scenes, including an alternate ending which I still can't make my mind up whether is a tongue in cheek version or something that was actually considered. Still, it would have been one hell of an ending that would have flown in the face of the usual Hollywood traditions. Finally, there's five minutes worth of Gag Reel. Never the less, it can hardly be classed as such as it consists of hammed up staged outtakes along with the occasional real, and equally unfunny, one. Things are rounded off with some nice filler material with trailers for Wallace and Gromit and Pride and Prejudice. Pity they couldn't manage to find room for the Just Like Heaven trailer.

As an extremely cynical, and thirty something viewer, I found it a little hard to enjoy this film. In fact, I found it quite hard to actually find a suitable slot in order to pigeon hole a film like Just Like Heaven. Based on Marc Levy's book If Only It Were True, it fails to find a way and tries to be a romantic comedy. Unfortunately, it fails, and then tries to be a bit of a Ghost, again failing to match those heart tugging strings which managed to increase sales of tissues by millions and causing a worldwide paper shortage. And whilst the Internet is full of tales of plenty of female cinemagoers blubbing into handkerchiefs, I couldn't actually see where the heart strings were suppose to be pulled. But then again, perhaps I just have a very cold heart.

Unfortunately, Just Like Heaven was rather boring and all too predictable. In fact, I think I'd even worked out the ending around ten minutes into the film - which is pretty good going for me. Even the principle actors were hardly inspiring and Reese Witherspoon seemed extremely bored and aching to cash her massive pay cheque and move onto something bigger and better. Even Jon Heder of Napoleon Dynamite fame fails to help the proceedings and he simply adopts the same Napoleon mannerisms. Talk about being typecast.

OK, so the blokes will probably endure the film because they can sit by their other half whilst they ogle Reese Witherspoon, but then again, perhaps Just Like Heaven is one of those films best left to the ladies because, rest assured, they'll love it. Just make sure you have that inevitable supply of tissues on hand.