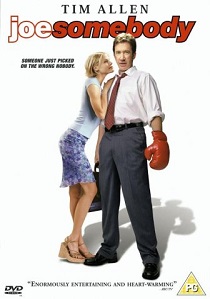 ReviewComedyDramaRomanceTim Allen
Review Article Go back to homepage
Joe Scheffer is an ordinary and unnoticed guy, but when he's beaten up in the office car park he decides to make a number of life and career changing decisions by getting even with the office bully.
Tim Allen, Julie Bowen, Kelly Lynch, Greg Germann, Hayden Panettiere, Patrick Warburton, James Belushi, Ken Marino, Wolfgang Bodison, Cristi Conaway
Comedy, Romance, Drama
2
1 Hour 34 Minutes
Thank you for supporting DVD365.net when you order using the link(s) below.
Buy DVD
Story

Joe Scheffer is a good-natured, but under appreciated, video specialist working at a Minneapolis pharmaceutical company. He's regularly passed over for a long promised promotion and he's going through an unhappy divorce. Let's just say that he's not the happiest guy in town. However, things are about to take a turn for the worse when Joe brings his daughter Natalie to the office's 'Bring Your Daughter To Work Day.

Upon arriving at work he discovers that his parking spot has been stolen by the office bully Mark McKinney. Already humiliated at the loss of his hard earned personal parking space, Joe is then beaten up by the bully right in front of Natalie and his colleagues. This highly embarrassing incident sends Joe into a bout of deep depression, but following a home visit from Meg Harper, the company's 'wellness coordinator', Joe decides that its time for a rematch with Mark.

This time Joe is going to ready and able to defend himself so he decides that he needs some martial arts instruction. Finding a local school he visits Chuck Scarett, a washed up "B" action star, and demands tutoring Matrix style, and fast. Next on his personal improvement list is a complete makeover including a flash new hairstyle and entire new wardrobe.

As news spreads of Joe's rematch, his popularity shoots through the roof and his climb up the corporate ladder takes a sudden leap. However, his daughter Natalie prefers her old father and not the new limelight seeking corporate leader of a father she now has. Although Meg was starting to fall in love with the real Joe, she too has become unimpressed with his new image. With the rematch with Mark fast approaching, Joe is determined to show Meg and Natalie that this nobody is now a somebody to be reckoned with.

The picture is bright and colourful with a high level of detail, although I did feel that there were a few times when there was too much contrast. The print isn't the cleanest you'll see on DVD, with a fair number of dust specks and scratches, but it still manages to remain free from any artifacting or outlining..

For this genre of film there is little requirement for masses of surround effects. However, what we have here is quite impressive. Whilst the effects channels are not used with great imagination they nevertheless manage to remain active for the majority of the film. The dialogue is crisp and clear in the centre channel and the front sound stage is controlled with ease with no cross channel bleeding.

The menu system is reasonably interesting with an scored and animated menu system containing a number of cut scenes and audible comments from the film playing the back ground. The extras are nothing to get too excited about, although the deleted scenes are reasonable enough and can be watched with an option commentary from director John Pasquin. There's an audio commentary from the director and producer but no signs of anything from Tim Allen - who is obviously way above doing anything like that. There's also the standard trailer and even an Easter egg to hunt.

Fans of Tim Allen are sure to enjoy this film whilst the casual viewer may find it a little slow and predictable. It's certainly a pleasant movie for the entire family to watch, unless you're an Allen fan, its probably not the sort of film you'd buy to watch over and over again. Its not classic Allen (if there's such a thing) but there is still no reason why you shouldn't consider this film for rent.