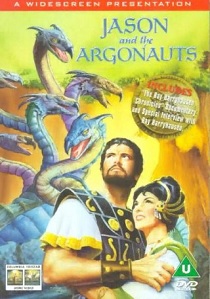 With the exception of Clash of the Titans, this is possibly the best fantasy-adventure film of all time. The gods are dictating life on the planet and there is no such thing as fate, it is a path chosen by the gods on Olympus for amusement. One such pawn in the game of life is Jason who as a child was smuggled out of the Kingdom of Thessaly during an invasion by Pelias.

Jason has been prophesied by the gods to re-take the throne of Thessaly. When he saves Pelias from drowning, Pelias tells Jason to travel to Colchis to find the mythological Golden Fleece. With the help of Hera, queen of the gods, Jason assembles a crew of the finest men in Greece and they set sail to the other side of the world to retrieve the fleece. He and the crew have to overcome many obstacles on their journey before they can return home and allow Jason to fulfil the prophesy.

Rather than just releasing this as a back catalogue item with little or no attention to the disc, yet again Columbia have done an excellent job is producing a DVD classic. The picture transfer is brilliant, although it does suffer from occasional graininess and artifacting, and the colours are surprising good for the age of the film.

The only down side to this disc is the fact the sound is only in mono. Perhaps Columbia could have made an effort to re-master the soundtrack and give us some surround. However, the sound is clear enough and the dialogue is retained at a sensible level, although it can become a little drowned out at times once the dramatic score starts.

The special efforts, although laughable now thanks to CGI, were ground breaking at the time and are still remarkable to view, especially the fight scene between the Argonauts and the skeletons. The painstaking stop-motion animation produced by Ray Harryhausen is amazing and just by viewing the documentary, narrated by Leonard Nimoy, exposes his passion for his work. It traces his career from his early teenage years through most of his feature films and also includes some unseen footage. This disc is a fitting honour to an amazing man and should form part of everyone's DVD collection.