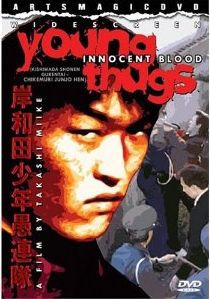 Set in Kishiwade, a fishing district in the Japanese industrial town of Osaka, Riichi, Ryoko and Yuji have finally graduated high school. For most people this would open up avenues of further education or the prospect of a well paid and respectable job. But not for this unruly bunch of delinquents and they even manage to relieve their poor old teacher of both his wallet and self esteem on their last day of term.

Whilst Ryoko appears to be the most sensible of three, deciding to get a job as a hairdresser in a salon, the boys continue with their wild and immature ways of fighting and getting arrested whilst with Riichi becomes a body guard for a gang of local thugs. Naturally, their jobs and pastimes come with risks and a lot of blood gets splattered around without anyone getting too badly hurt or taking too much offence. Still, it looks like the injuries sting just a little bit and most of Riichi's pay is probably spent on plasters and dental care. Poor old Riichi is forever appearing bandaged or heavily bruised.

But when an old friend is released from prison, it takes the appearance of Riichi's old flame Nahomi to put a spanner in the works. And when Nahomi reveals that she had a major crush on him, Riichi breaks up with his current girlfriend and the pair start to date. But in the process he finds himself more and more isolated from his friends and he even stops fighting at Nahomi's request. However, the rival gangs don't seem to want to stop fighting and when cornered he fails to put up any resistance and gets beaten to a pulp. But during his self inflicted isolation Riichi has been left behind by his friends as they realise that it is finally time to grow up. Can Riichi finally find his way in the world or is the temptation for a good old punch up just too hard to resist?

If you are a person who likes to view their films on large screen televisions and expects the highest quality transfers available, you're going to be rather disappointed here. In fact, the picture quality is pretty abysmal with enough grain and washed out colours to give even the most expensive of plasma screens a nightmare from which it would dearly love to forget. The colours are so subdued and soft that at times it could almost be a black and white film whilst print and dust damage is evident throughout. It's not the best transfer you're going to see and to be honest it's pretty near the top of being the worst you'll see. But never the less, director Taskashi Miike always seems to be able to make a film on such a shoe string budget that you simply have to accept it as it is. It's by no means brilliant, but it's just about watchable.

The film is equipped with a 192 Kbps Dolby Digital 2.0 and 448 Kbps Dolby Digital 5.1 soundtrack. Naturally, unless you understand Japanese, the subtitles are a bit of a must so the actual audio quality is fairly low down the priority list. However, even given the amount of dialogue and the lack of activity in the rear channels, the Dolby Digital soundtrack is quite appealing and you can hear every overstated punch with bone crunching ease whilst the dialogue is crisp and clear in the centre channel. Still, Japanese films seem to have an obsession with over exciting and over powering music and this is confirmed during the films open melee where everything just becomes a musical mess. Fortunately, these musical interludes don't interrupt the film too many times.

Although the initial menu introduction is animated the menu system remains static but rather noisy with various violent sounds and some rather annoying keyboard music from the film. Fortunately, by selecting a sub-menu this headache inducing music is silenced and you end up being rather glad for the static and silent menu. And although it's not on par with Artsmagic's usual offerings, the extras on offer do help to add some much needed value to the disc.

The main extra is the seventeen minute interview with director Taskashi Miike. The interview is split into a number of question and answers and is conduced in Japanese so those trusty optional subtitles will certainly be needed. Unfortunately each of the questions is not chaptered so you'll have to work your way through the entire interview. Still, the interview is informative and you'll pick up a few interesting snippets about the production such as, being set in Osaka, local dialogue was used throughout. Now if learning Japanese wasn't already hard enough, you now have to contend with local dialogues!

If you were ever curious about Osaka then look no further than the eight minute Osaka History and Culture featurette. Written and presented by local Osaka resident Takako Tucker and presented in English, together with a selection of pictures you'll learn all sorts of fascinating facts and figures about its population, culture and history. You could almost be back at school and quite why this needs to be on the disc is beyond me. It reeks of filler material. Still, I guess if you are interested in Japan and its culture then you couldn't do any worse than checking out this featurette and it's certainly a novel way to highlight a production location.

The Original Sleeve VHS artwork is also shown and being in its native Japanese there is some serious amount of translation required. So in Artmagic's usual wonderful and informative manner, three sections of the cover can be highlighted and then translated into its equivalent English. There's the usual bit of filler material with the Original Trailer whilst there's some textual Biographies and Filmographies on the five principle actors as well as substantial background information, and additional sources of information, on director Taskashi Miike. Whilst these last two features are hardly ground breaking stuff, they all help to add value to the disc.

Young Thugs : Innocent Blood is a tricky one to call. Whilst fans of Taskashi Miike will instantly recognise the quirkiness of the film, the general viewer will most likely be left rather perplexed at the goings on. However, if you can stick with the film then it can actually be quite poignant and rather amusing as poor old Riichi keeps getting battered and is forever in the need of a band-aid or two. Trouble is, the pace can be a little pedestrian at times and even the most ardent of Taskashi Miike fan may have a spot of trouble staying awake or trying to work out where the plot is going.

If you are interested in looking at the films of Taskashi Miike then this is probably not the best of starting points, although the prequel film Young Thugs - Nostalgia would be the perfect film to start exploring the world of Taskashi Miike. Still, with Artsmagic continuing to release Taskashi Miike's extensive catalogue of films which have never been seen before outside of Japan, there is bound to be something that will hit the spot. This could range from blood thirsty gore in Full Metal Yakuza or a more sedate period drama in the form of Sabu. Either way, it's an interesting way to venture into the weird and wonderful world of Japanese cinema.