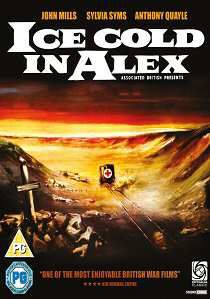 ReviewWar / Western
Review Article Go back to homepage
This classic World War II drama stars John Mills as an ambulance driver who escapes the siege of Tobruk in the company of a sergeant major, a nurse and a South African officer who has become separated from his unit. Suspicions arise about whether one of the group is a German spy who is undermining their attempt to reach safety.
John Mills, Sylvia Syms, Anthony Quayle, Harry Andrews, Diane Clare
War/Western
B
2 Hours 9 Minutes
Thank you for supporting DVD365.net when you order using the link(s) below.
Buy BD
Story

When a British base in Tobruck is attacked by the German Afrika Korps during the Western Desert Campaign of World War II the order is given to evacuate. Trying to find a way to escape the approaching army, the alcohol soaked and fatigued transport pool officer Captain Anson plus his loyal Mechanist Sergeant-Major Tom Pugh board a battered old ambulance and head out into the desert - but not before taking aboard two nurses left behind in the chaos and rush to leave.

As they set off for the relative safety of the British Lines in Alexandria they come across an Afrikaans-speaking South African officer, Captain van der Poel, who is carrying a large pack to which he is very reluctant to reveal the contents of - although by producing two bottles of gin from his back pack, van der Poel manages to persuade Anson to let him join in on their arduous trek. And with an ambulance with two drivers and two nurses, and now with a handy patient if needed, Poel would become a useful asset if intercepted by the advancing Germans.

All manner of obstacles threaten to curtail their progress through the relentless and unforgiving desert - the advancing Germans, a minefield, a broken suspension spring, steep dunes and quick-sand - and Van der Poel quickly arouses suspicion with his obsessive attachment to his large and mysterious backpack. With the British army running on tea, Poel's apparent lack of knowledge of any South African tea-brewing techniques is drawing some suspicion and they start to question who he really is - even more so when he keeps wandering off into the desert at the same time each day (with backpack in tow) to go to the toilet.

With so many problems - and distance - to overcome, all that sustains the group is Captain Anson's promise of a tall, frothy, ice-cold glass of beer that awaits them upon their arrival in Alexandria. Let's hope that the bar will still be open and that he's remembered to bring his wallet...

The digitally restored picture is an excellent, and although Ice Cold in Alex was originally shot in black and white, the images portrayed here are crisp and clear. The only issue is with the stock war film footage which is used to show the German advance on to Tubruk and the bombing of the mine field which, considering the original wartime stock was pretty poor in the first place, was never going to be given the restoration and clean up treatment. Naturally, the lack of colours means it can't be compared to a colour film stock, but the level of detail is excellent and there's plenty of annoying flies clearly visible in high-definition throughout the desert scenes.

The Dolby Digital 2.0 mono soundtrack is not going to set your room alight with Saving Private Ryan style sound effects, but the standard, and typically bracing, musical score of a British war film is ever present whilst the annoyingly plumb English accents and dialogue are crisp and clear throughout.

Whilst it's a static menu - using the original poster as the menu backdrop - it is at least scored with Leighton Lucas's dramatic musical score from the film. Fortunately, there's a good selection of extras which add further value to what is already a great disc.

I think that the Sylvia Syms Interview is one of the best DVD interviews I've ever seen. I'm sure either the veteran actress had been at Captain van der Poel's gin or she thought she'd better conduct the interview in character. Either that, or she's a bit of a theatrical "darling". Never the less, it makes her all the more endearing and all the more enjoyable. Fortunately, the interview is spot on and Sylvia goes to great lengths to say how much she enjoyed making the film - even though, as a contract artist with the studio, she didn't really have any choice in the matter and she had to do as she was told (something you're not likely to see these days!). Sylvia also points out how bad the shoot in the Libyan desert was too, with the constant heat and, especially the flies, causing havoc (resulting in everything and everybody being sprayed in that very healthy of things - DDT). All in all, it's a great insight into a classic British film.

John Mills took a 16mm colour camera with him whenever he went out on location so the John Mills' Home Movie Footage does exactly what is says on the (film) tin. Unfortunately, there's no sound, but more importantly, it's in colour so there's plenty of colour behind-the-scenes footage of the cast, crew, the local people and various locations. It could simply end up being one of those boring holiday films which people do their level best to avoid a showing of, but this footage is near perfect pre-cursor to your now standard DVD behind-the-scenes extra.

Things are rounded nicely with a Photo Gallery which contains a series of Black and White still shots from the filming and the Theatrical Trailer (which also appears to have been cleaned up and remastered). All in all, it's a good collection of extras which helps to make this Blu-Ray release a worthy purchase - especially when you consider it would have been just as easy to simply cash in and release a vanilla disc.

Ice Cold in Alex feels like more of an endurance film than a war film, and there's some great scenes to keep you interested and the blood pumping as the ambulance battles its way through the desert. Surely one of the best scenes has to be when they've all spent hours trying to get the ambulance to the top of a very large and steep sand dune, finally reaching the top, only for the truck to roll all the way back down to the bottom. Still, nothing can top that final scene in the bar when they finally get their hands on a ice cold Calsberg (or, if you remember your adverts, a Holsten Pils and a gurning Griff Rhys Jones).

Ice Cold in Alex is a classic British war film with everything you'd associate with a British film made in a time when the war was still fresh in the mind of many. You've got your usual dramatic soundtrack, annoyingly plum English accents, the usual motley crew of actors (where would a British war film be without the likes of John Mills, Harry Andrews or Anthony Quayle?), plenty of over acting, an attractive female cast (who, thanks to the strict censorship laws of the time, have to wear long trousers in the blistering heat of the desert) and a bit of gratuitous slapping of the face to calm your typically hysterical woman down (try getting away with that today!!).

This title is one of many Blu-Ray, DVD and cinema re-releases of iconic titles from Studio Canal. The studio is undertaking an extensive digital restoration programme of old classic titles at a new state-of-the-art cold storage facility at Pinewood Studios - and there's a commitment to release plenty more classics from the archive. With the likes of The Lavender Hill Mob and Kind Hears and Coronets already on the horizon, film fans the world over will be eagerly awaiting further classic high-definition releases from the best of UK cinema. And judging by the exceptional work done here, those fans are not going to be disappointed with the results.