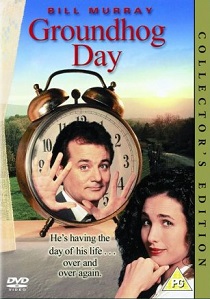 ReviewComedy
Review Article Go back to homepage
Teamed with a happy go-lucky producer and smart aleck cameraman, TV weatherman Phil Connors is sent to the small town of Punxsuntawney in Pennsylvania to cover the annual Groundhog Day celebrations. On leaving town Phil and the crew are caught up in a blizzard and end up being trapped in the town he is desperate to escape. However things are set to get even worse as he wakes up the next morning to discover that it is Groundhog day again!
Bill Murray, Andie MacDowell, Chris Elliott, Stephen Tobolowsky, Brian Doyle-Murray, Marita Geraghty, Angela Paton, Rick Ducommun
Comedy
2
1 Hour 37 Minutes
Thank you for supporting DVD365.net when you order using the link(s) below.
Buy DVD
Story

Phil Connors is, as I expect that most television presenters are, a pretentious self-centred person with only his career in mind. When he and new producer Rita are sent on the annual trip to film the Groundhog Day celebrations all he wants to do is get the filming done and get out of town. Unfortunately for Phil, he failed to predict a blizzard which completely cuts off the town.

Retiring to bed he awakes the next morning to discover that the snow has disappeared and it appears to be Groundhog day again with all the local population getting ready to start the festivities. Each time he goes to bed the same scenario keeps getting repeated each and every day.

Unable to escape Groundhog Day he first starts to take advantage of his predicament. He goes from discovering school hood secrets from local women, and then faking knowing them the following day, to robbing the local bank and spending the proceeds. Eventually he descends into madness and commits suicide via all sorts of methods knowing no matter what he does to himself, or surroundings, all will return to normal the following day.

Eventually, resigned to the fact he can do noting to escape, Phil comes to his senses and sets about finding the real reason for his daily nightmare. He soon realises that he loves Rita and must change to win over her heart and turn into an all round nice guy. However, at the end of the film I still felt that he is a bit of a phony as he adjusted his lifestyle - could he really that genuine and change that much to break the spell?

This disc really stinks of being a bit of a back catalogue cash in with very little done in the way of cleaning up the image and sound to take advantage of the format. Not only is the soundtrack just a simple two channel stereo track, but the picture quality is just awful. Although there are no artifacts, it is grainy throughout with a low bit-rate and can really only be compared with the VHS version. In fact, it's almost as if they simply transferred a VHS copy to DVD.

This is a really entertaining and amusing film with Bill Murray really on song with, in my opinion, possibly his best film of his career. I especially liked his descent into madness and hopelessness of the situation. Just look out for his slouch sessions in front of the television answering all the questions on a quiz show before they have be asked and his despondent looks on his daily suicides. I'm sure you'd soon start doing the same yourself!

With Columbia's normal superb presentations this is truly a step back to the bad old days of early region 2 titles which seemed to think that Scene Selection could be classed as an extras. Even though the film is a class act, given the state of the disc, it is very hard to find anything on this disc to recommend a purchase. On the other hand, if you have never seen this film before then it is well worth a viewing, be it via renting the disc from your local store, or by buying the video.

Doctor Strange in the Multiverse of Madness (2022)