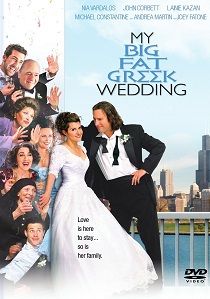 Toula Portokalos comes from a large extended Greek family. Whilst all of her brothers and sisters are married with children she remains the only still single member of the family. Her father constantly worries that she will become, and look, too old to marry and produce even more grandchildren. He is so desperate for her to find a nice Greek boy to settle down that he is constantly on the look out for suitable partner. Naturally, she is not too impressed with his choices with men ranging from near death to medallion encrusted gigolos.

As a result of her marital status she is in the unenvied position of working for her father in the family owned Greek restaurant "Dancing Zorbas". With no real excitement or goals in her life she hardly dresses to make an impression and her dowdy clothes and glasses means she never gets noticed. That is until she meets Ian Miller in the restaurant and decides that she needs to do something with her life.

Toula has a natural ability with computers and decides to enrol in night classes to study. Unfortunately her father decides that women do not use computers and should not attend. Her mother is more than happy for her to attend college so between them they hatch a plot to allow her to go. As she becomes more comfortable with her new surroundings Toula becomes more comfortable with herself and sets about changing her image. Gone are the dowdy clothes and glasses and a new and more exciting and outgoing Toula is quickly revealed. With her course successfully completed she now longs for her new skills to be put to the test. Again, it becomes yet another task to convince her father to allow her to work in a family members travel shop.

It is whilst working in the travel shop that she again bumps into Ian Miller again. With her confidence now at full steam she soon finds herself dating and falling in love. It doesn't take long for her ultimate wish to become true and when Ian finally pops the question she quickly accepts. However, there is a problem. Ian is not Greek and her father is far from happy and he objects to the engagement. Fortunately common sense prevails and an engagement goes ahead with Ian promising to become more "Greek".

However, both Ian and Toula are in for a very large culture shock when they go and meet each others parents. Things are going to be even more interesting for Ian's parents when they turn up at the Portokalos engagement party only to be greeted by hundreds of raucous family members all keen to meet the parents of the groom. If you think that's bad then just you wait until the wedding day!

If you opt for the American region one edition of this film then you'll have both fullscreen and widescreen editions of the film on the same disc. However, if you opt for the slightly cheaper Canadian edition then you'll have to purchase either the widescreen or fullscreen version. I guess the inclusion of the French audio soundtrack on the Canadian version resulted in the loss of one of the screen formats. It is the Canadian widescreen version of the film which is on review here.

The picture is bright and colourful with a high level of detail along with a constantly high bit-rate throughout. The films many colourful scenes are handled with ease and there are plenty of rich and vibrant colours on show to challenge the encoding process. The print is also free from any picture imperfections and dust scratches and there are no signs of artifacting or those annoying edge enhancements which can blight some richly coloured films. I was extremely impressed, and pleasantly surprised, with the overall picture reproduction and for a film which was essentially made on a low budget it shames many of the big budget titles.

Whilst the picture reproduction excels, the sound is rather dull, but for a film of this genre there is unlikely to be much to get over excited about. However, the dialogue is clearly audible in the centre channel at all times and whenever the lively Greek musical score bursts into life it doesn't overwhelm the entire soundstage. As a result the volume can be set at a reasonable level without having to dive for the remote every few minutes. There is little use of the surround channels and to be honest you could just as easily enjoy this film by using, and if you have any that is, the inbuilt speakers of your television or projector.

For such a massive sleeper hit that made hundreds of millions of dollars at the cinema, you would have thought that they'd have gone to town on the extras. Whilst the menu is pleasantly animated and scored once you access the extras section you'll discover a rather slender offering indeed. Although there's a reasonable audio commentary by the director and main cast members, the rest is just filler material of no real interest. They even manage to inject a bit of cheek by including a number of trailers for some of their up and coming films they'll be hoping, thanks to the success of this film, people will want to see.