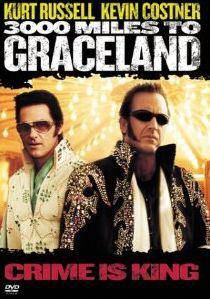 ReviewThrillerAdventure
Review Article Go back to homepage
A group of ex-cons travel to an Elvis Presley convention in Las Vegas. However, they have no intention of singing or betting, they have robbery in mind.
Kurt Russell, Kevin Costner, Courteney Cox, Christian Slater, Kevin Pollak, David Arquette, Jon Lovitz, Ice-T
Action/Adventure, Suspense/Thriller
1
2 Hours 11 Minutes
Thank you for supporting DVD365.net when you order using the link(s) below.
Buy DVD
Story

When a group of ex-cons, whose ruthless leader is a massive Elvis fan, decide to rob a casino in Las Vegas, what better time to do it than during an Elvis convention. With the place full of Elvis Presley impersonators they'll have no trouble mingling with the hordes whilst they make their way to the strong room.

As they make their way to the strong room they disable the security cameras, which whilst keeping their movements hidden, raises the suspicions of security. The group are spotted in the strong room and when they attempt to make their escape a massive gun battle ensues, sparing no innocents in the hail of bullets.

The group manage to make their get away in a helicopter and prepare to split up the massive horde of money. However, there is double-crossing on one of groups mind and no body is going to get their cut of the money until they are safe, and with the police on their tail it is not going to be that easy.

The picture is rich and colourful with no signs of artifacting. However, it does tend to suffer from an excessive amount of outlining, although this only appeared to be a problem during the bright outdoor scenes. The introduction is also a little bizarre with a computer generated scorpion fight that is so appalling obvious, and out of place, that it spoils the whole film. However, once the action kicks off in the bright lights of Las Vegas the quality of the transfer and the DVD technology really shines through.

The sound is a bit of a mixed bag, and like the film, it only comes alive during the action scenes at the beginning and end of the film when the bullets and music fly around the soundstage. The dialogue is crisp and clear in the centre channel and the incessant rock soundtrack really does rattles the subwoofer.

The menu is a static and boring affair with only the main menu section scored. The extras are hardly worth mentioning with only a trailer and some textual information on the main cast members. There was so much scope to improve on this appalling lack of extras, and Warner only had to look at the closing credits to find them. Why could they not use the closing video and outtake, as more must exist, as additional items?

Be prepared to see Courteney Cox like you've never seen her before. Unlike the rest of the Friends cast, she has managed to cast aside her neurotic character typecasting and produce a gritty and sexy performance. You won't be able to watch her in Friends in the same light again.

The film was panned by the critics and avoided by the cinema going public, but it is actually rather good with a strong cast. Although the film is a little too overlong with some bizarre camera work, it is the utterly ruthless Kevin Costner and the heist that really gets you sat up and paying attention. You won't get a better, or more violent, robbery scene than this.