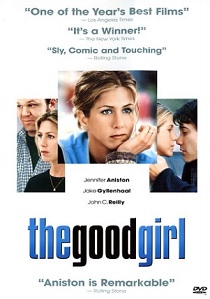 Justine Last works in a dead end job at the local Retail Rodeo, that classic American drug store that fills many a towns high street. She is married to Phil, her boyfriend from high school, who is a painter and decorator by day and pot head by night. She really hates her boring life and although Phil does truly love her, he doesn't take notice of Justine with his daily intake of beer and marihuana taking precedence over everything. Justine even suspects that her attempts to conceive a child is failing because of his drug habit.

With Justine longing for something exciting to happen in her life her attentions turn to Holden Worther, the new teenage employee at the Retail Rodeo. Holden is a troubled teenagers who models his life, and name, on the hero in the Catcher in the Rye novel. He even fancies himself as a bit of a writer, but all of his stories end up being based on his bland and boring existence. With Holden and Justine longing for something exciting in their lives it would seem they are destined to be together. But as usual, there's always a spanner in the works and unwanted attention from various town members, with some too close to home for Justine's comfort.

The picture is reasonability bright and colourful with a fair level of detail throughout, although it does have a definite grain and washed out appearance which was especially evident during the daylight scenes. However, I put these problems squarely on the budget restraints for this production. Never the less, the bit rate remains above average throughout and there are no real signs of artifacting or outlining. The print is also relatively free from picture imperfections and dust scratches.

For this films type of genre, and it being a low budget film, I wasn't really expecting too much from the sound department. However, it is actually rather good. Naturally, you won't be expecting booming sound effects and high levels of LFE's, but the dialogue is impressive and it remains firmly locked in the centre channel without any cross channel bleeding. There's also some really effective ambient surround effects which add to the overall atmosphere of the film. One note of warning though, the sound level is on the low side and it needs the volume level cranking up a notch to make any real difference. Just remember to lower it again before you play that action flick.

The menu system is surprisingly effective with the musical score and cut scenes from the film appearing in the background, although as soon as you access a submenu it becomes a static and silent affair. The extras are spread over two sides and are reasonable enough with the highlight being the Anniston audio commentary. However, for some reason it is not a full length commentary but only for a number of scenes. Fortunately, what she does provide is interesting even if they are a little brief. The commentary on her first, and probably last, sex scene is amusing enough and the other commentaries certainly show her enthusiasm for the project.

There is a full length Audio Commentary but it's from the director and writer which quickly becomes boring with their rather dull delivery. There's also a number of Deleted Scenes and Gag Reel that just contains the various cast members falling about laughing. Again, this soon becomes rather tiresome, even if it is rather intriguing. Finally, there's an Alternate Ending with a different monologue from Aniston. I certainly preferred the final version used in the film, but at least the choice is there for you to make.

If you are expecting a film that has Jennifer Aniston's character from Friends then you are going to be sadly disappointed. Instead, what we have here is some remarkable acting from someone who has the ability to perform in other projects which, unlike many of the other cast members, don't type cast her role in Friends.

Jennifer certainly wouldn't have done this project for the money, after all it was made on a meagre budget and on an independent label. No, she opted for this project for the kudos. The result? It has most definitely placed her in the big budget shop window and a role outside of comedy. Is this the real reason why Jennifer has not signed up for another series of Friends?