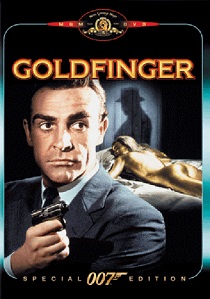 ReviewCrimeAdventure
Review Article Go back to homepage
Special agent 007 comes face to face with one of the most notorious villains of all time, Goldfinger. And now he's got to outwit and outgun the powerful tycoon before he can hatch his deadly plot on the vast gold reserves at Fort Knox.
Sean Connery, Gert Frobe, Honor Blackman, Shirley Eaton, Tania Mallett, Harold Sakata, Bernard Lee, Martin Benson, Cec Linder
Action/Adventure, Crime
2
1 Hour 45 Minutes
Thank you for supporting DVD365.net when you order using the link(s) below.
Buy DVD
Story

The Bank of England suspects that someone is smuggling and stockpiling huge quantities of gold. They believe that the international bullion dealer Auric Goldfinger is involved and they request that James Bond be assigned to investigate his dealings and discover how he is smuggling gold out of the country.

Felix Leiter shows Goldfinger to Bond whilst he is playing a card game. Bond soon reveals that Goldfinger's continuous winning streak is hardly by skill but rather by some underhand help from his assistant, Jill Masterson, in his hotel room who is equipped with binoculars and a radio. Bond puts an end to his winning streak but soon exposes Goldfinger's darker side when he gets revenge on Jill by covering her in gold paint causing her to die of asphyxiation.

Bond traces Goldfinger to a factory in Geneva and exposes his clever smuggling operation and a more sinister plot. Bond is caught and interrogated by Goldfinger, with the now famous laser cutter scene, and taken to America. There he learns the true extent of Goldfinger's plan to irradiate the worlds largest stockpile of gold at Fort Knox by detonating a nuclear bomb in the vault.

Although the film is over thirty years old the picture quality is still bright and sharp with an above average bit-rate, although it does tend to suffer from whiskers. Unlike the previous disc, the colour definition is much better with a higher level of detail. The sound is still in mono, we won't get stereo for another twenty years, but the dialogue is clear enough.

Again MGM have come up trumps with the large number of useful and interesting extras. With each new Bond disc the extras just keep getting better. It is getting harder and harder to see how MGM can surpass each Bond release with the standard of extras. It puts many other companies to shame with their static menus and pointless extras.

Classic Bond, classic baddies, classic music and the best line ever uttered in a Bond film. Sean Connery is just brilliant in this film and those trademark gadgets are just starting to filter through. Even though it's an early outing for Bond, it still remains one of the best. Just go buy this disc!