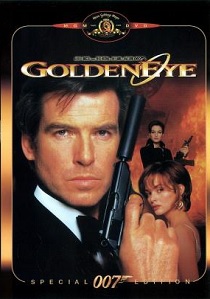 With a new 'M' in charge the cheque is no longer blank and Bond finds himself battling the penny counters rather than the enemies of old. When a newly designed helicopter, impervious to the effects of the effects of a nuclear explosion, is stolen during a demonstration the British decide not to follow up the investigation.

However, when a mysterious explosion wipes out a large area of electrical activity in Russia the British realise that the Russians most top secret space weapon, Goldeneye, was not a myth. When the stolen helicopter is detected in the area the British become suspicious and dispatch Bond to Russia.

Bond uncovers a plot by a Russian crime syndicate to detonate another Goldeneye weapon over London, but only after they have transferred billions of pounds from the Bank of England. With the money gone and the weapon fired they will have removed all of the electronic records and thus any evidence. With a high ranking Russian general, and old friend, heading the syndicate, Bond will need to use all of his wits, and enemies, to stop the syndicate before it is too late.

The picture is bright and colourful which some rich colour tones and textures. Although the bit-rate is average the picture stands up well to the vigour of a frantically paced action film. There's no signs of artifacting or outlining, however, in some of the more darker indoor scenes the lower bit-rate led to a small amount of pixelisation.

The sound is absolutely superb! The dialogue is crystal clear and remains locked in the centre channel throughout the film. The surround channels are used extensively and with plenty of explosions and gun fire throughout there's plenty of LFE's. The haunting ambient music effects, especially during the opening scenes, really added to the action and with the Bond music updated for the 90's, Goldeneye has the most foot tapping soundtrack to date.

The extras on the original version are disappointing. The commentary is good but there is a menu option for the theme music video (not listed on the DVD cover) which doesn't appear to work. However, apart from looking in a bargain bin it would now be difficult to obtain the original region two version, and since the special edition is far superior you'd only ever want to buy this edition.

The extras on the special edition are as good as we've come to expect from the Bond DVD series so far. With the publics desire for information the film companies now go to great lengths to produce plenty of featurettes to keep them happy. These documentaries have been included on this disc, and although they are American productions, they are interesting enough. One such featurette is presented by Elizabeth Hurley and I kept getting distracted by her increasingly tight fitting clothes! Together with twelve, yes twelve, television adverts and music video to the superb theme tune by Tina Turner, it all adds up to an excellent value for money disc.

This movie is Pierce Brosnan's first outing as 007, a part which he plays superbly. He has all the charisma and charm you would expect of a Bond, plus an icy hardness, which allows him to be more convincing in the showdowns with the enemy. Its a character which absorbs all of the previous Bond actors interpretations. Arguably Brosnan is the best bond to date.

This film has all the classic ingredients of a great Bond film, Martini's, girls and guns. The opening scenes are stunning with a breath taking, and record breaking, bungee jump from the top of a dam. The stunts are first rate and are as extravagant as ever. The Bond girls are as stunning, and in keeping with the more in touch feeling of the film, play stronger independent characters than their predecessors.

Goldeneye stands out as a good example of Bond films, it remains as popular as it has ever been and is great fun to watch. Long my the adventure continue into the 21st century.

In the six years since the release of License to Kill the world has changed an awful lot. With the Berlin wall gone and an environment hostile to the womanising ways of Bond, was there still a market for another Bond film? The answer to that is a definite yes, but this time the women are no pushovers and they have been updated to fit in with modern attitudes.

This is expressed best in the new female M, who is played by Dame Judi Dench. She is perfect for the part, serious and means business, although the PC stance taken by the filmmakers is a little too much for my liking and distracts too much from roots of Bond. I'm sure Ian Fleming would be spinning in his grave.