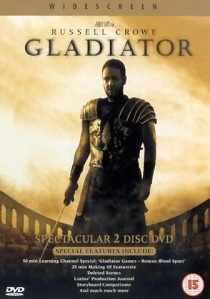 Maximus is a powerful, and popular general loved by his soldiers and the people of Rome. Even the aging Emperor, Marcus Aurelius, is impressed with his stature and courage in battle. Before his death, the emperor chooses Maximus over his own son, Commodus, to succeed him and return the Roman empire to the people. Naturally, Commodus is far from impressed with the events and assumes the role of the new emperor and sentences Maximus, and his family, to death.

Although Maximus manages to escape from his executioners he is unable to rescue his family in time, arriving at his home to discover the burnt and tortured bodies of his wife and only son. Loosing the will to live, and suffering from injuries sustained during his escape, he collapses only to be captured by slavers who then sell him on to a gladiator school where he is destined to fight until he dies.

Initially unwilling to fight, Maximus discovers that by training hard to become a true gladiator he can travel to Rome to fight at the coliseum and take his revenge on Commodus, and thus fulfilling the dying wish of the emperor. Using his knowledge of the battlefield, he quickly impresses his audiences and the time soon comes when he and the group of gladiators are called to Rome. There he is to participate in a marathon of gladiator games held in the honor of the new emperor, and where he can plot his revenge.

For a new film I thought that the picture quality was actually rather poor. However, the quality problem was nothing to do with the DVD picture, which was bright and colourful with an above average bit-rate throughout the film, but to do with the actual film stock. There was almost a continuous dusty picture noise which really spoilt an otherwise excellent disc, heavens knows where they sourced the master from.

However, putting that quibble aside, the sound was totally mind blowing as this disc contains the first mainstream region two film with a DTS soundtrack. Those people who are fortunate enough to own a DTS compatible DVD player and amplifier are about to discover what they've been missing. The sound is truly awesome with the rear channels being continuously used throughout the film. During the initial battle scenes you are completely surrounded by thuds, screaming, shouting, charging horses and thousands of arrows flying over your head - so much so that I kept ducking and looking behind me incase a barbarian was charging towards me.

Once the film turns to the coliseum you are enveloped with the cheering crowds and battling gladiators as lions roar and swords clash all around you. If you ever needed proof that your subwoofer was working then you'd find it hard to find a better film to remove the cobwebs from ceiling (and probably your neighbours) Even during the quieter scenes there are birds twittering along with other ambient effects from the day to day goings on in Rome.

Both the Dolby Digital and DTS soundtracks are sparkling to an award winning extent. Nevertheless, yet again, the DTS soundtrack towers over the Dolby Digital track with the shear brilliance of the separation. The dialogue is fixed in the centre channel, with no bleeding, and was so clear and audible that there was no need to keep cranking up the volume (after a hasty retreat during the battle scenes) to hear what was going on.

One of my work colleagues bought this film and had the pleasure of hearing his first DTS soundtrack on his home cinema set-up. The following day he rushed into my office and couldn't praise the sound enough, he was so blown away that it may just convince him enough to finally get his DVD player chipped in order to access the wider range of DTS titles on region one.

This big-budget summer epic is rightly worthy of its Hollywood predecessors. Whereas its forerunners relied on massive sets, and huge numbers of extras, this first epic of the 21st century makes full use of the computer. There are many fabulous CGI views of ancient Rome, although at times they did look a bit too much like CGI's, along with some crafty computer work to make the crowds of extras bigger than they really were.

With an impressive set of extras it is hard to fault this disc, even though the ending was a little disappointing and the picture could have been better. What an Epic, what a disc, what a purchase!