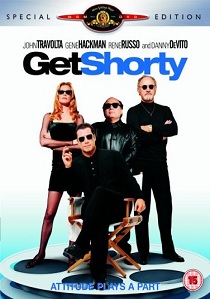 Film loving Loan Shark Chili Palmer is sent to Las Vegas to collect a debt from Dry Cleaner Leo Devoe, who is lying low due to being assumed dead and cashing in on an insurance policy. Once in Vegas Chili traces Leo to a casino, who in a failing attempt of keeping a low profile by winning large amounts of money, spanks a Cocktail Waitress and is put on a plane by the casinos owner to LA. If Palmer decides to follow there is another job for him if he is interested, collecting $150,000 from movie producer Harry Zimm. Naturally, Chili is interested.

He lands in a wet LA and collects his rental Oldsmobile Silhouette, he ordered a Cadillac. And so begins his vocational transition from Loan Shark to Movie producer. He wastes no time in tracking down Zimm who is at the home of his leading lady, failed actress and ex-wife of Martin Wier, Karen Flores. But rather than collecting the debt, Chili finds himself helping rather hindering Hary by pitching his idea of a movie. And what better way to come up with a story than by basing it on the true events of the errant Leo with Palmer in hot pursuit. Zimm likes the story.

The only problem is that Zimm finances his films with money from Bo Catlett, a Limo Hire Company owner, who also deals in drugs. And it was his money that Zimm took to Vegas in order to try and raise half a million dollars so he could buy a script, a quality one with no mutants or maniacs in it, and it's a script that leading actor Martin Weir is interested in. Trouble is, Zimm blew the lot. So begins the double crossings and dark comic capers.

The picture is bright and colourful with a high level of detail throughout. With MGM undertaking an ambitious project to remaster most of its catalogue into High Definition, such as its many Bond films, Get Shorty is one of its first products off the production line. And on the whole it looks rather good, with little or no signs of dust scratches or other picture imperfections, whilst flesh tones and black levels are impressive throughout. Some serious tests come once the action is taken outside and into the bright sunny locations of Los Angeles and Miami. Fortunately, everything is handled with ease with grain and excessive amounts of contrast kept to a minimum. However, indoor scenes can suffer from too much contrast at times whilst outlining can also be an occasional problem.

Whilst Get Shorty's region one counterpart has been reissued with a new DTS soundtrack the region two edition has to apparently cater for numerous languages and rather unfortunately it is not included here. However, in it's place are 448 Kbps Dolby Digital 5.1 soundtracks in English, German, French, Italian and Spanish. Still, given the heavy dialogue based nature of the film the DTS soundtrack is probably not too much of loss here. And with all of these soundtracks taking up valuable space on the first disc, the extras need to be accommodated on a supplemental disc.

Sound wise, given the heavy dialogue nature of the film, all of the sound action unsurprisingly occurs in the front channels. The dialogue is locked firmly in the centre channel, with some good steerage in the front stereo channels, whilst the surround channels are used sparingly throughout. However, when they are used, with a good example being a plane flying overhead at LA international airport, they are used to good effect. There were also few signs of activity in the LFE channel, although given the lack of dynamic effects to play with, it was hardly to be expected

The menu system design is reflected across both discs and after the required language is selected from the brightly coloured menu, the main menu and its options is presented. Scored and animated with various small cut-scenes from the film playing in the background, it is pleasantly presented and easy to navigate through. Selecting a sub menu results in a nice transition effect with a clapperboard whilst only the Scene Selection menu is animated and scored. The only minor quibble with this is that if you're navigating around numerous menus the transition effect, although clever, can get a little tiresome.

The main extra on the first disc is the Audio Commentary with Barry Sonnenfeld. And with most of the roles in the film played by major Hollywood stars it would seem a bit too much to expect anyone of them to find the time to assist in the commentary. Never the less, Sonnenfeld manages well enough by himself and gives a very detailed account of the entire filming process from the casting, the various locations, right through to the editing process. There are a few pauses in his commentary, but this is only because he waits for certain things to happen in the scene to assist with his comments, whilst some of his information has clearly dated since its original release. But on the whole it's a very interesting and absorbing commentary without too much back slapping. Also, if you'd rather enjoy the film without his audio ramblings, you can also opt for his commentary as a subtitle track.

The extras on the second disc are dominated by the Get Shorty : Look At Me, Get Shorty: Wiseguys and Dolls and the Page To Screen Get Shorty documentaries which contain a good selection of interviews with the main cast, who discuss the characters and their various interpretations, director Barry Sonnenfeld, the screenwriter and Elmore Leonard, the prolific writer of the original book on which the film was based. These run for roughly twenty-five minutes each and I found them to be quite interesting, particularly when it is revealed who was originally intended to play Chili Palmer. Surprisingly, Travolta actually turned down the part until a chat with a certain Mr. Tarantino persuaded him otherwise.

In the five minute Going Again featurette, director Barry Sonnenfeld talks about a particular scene in the film where Chili Palmer and Karen Flores go to Martin Weir's house to talk about Zimm's movie. Watching from the background we see Sonnefeld and the rest of the crew in action as they take up large amounts of time set up the lighting and cameras. With Danny DeVito knowing the amount of time it was taking to set up the scenes, whenever he messed up a line Danny would simply keep going and retrying until his lines were perfect. As a result, a lot of adlibbing occurred and one such scene, mistakes and all, is included here.

In the five minute, and rather poor picture quality, the Get Shorty Party Reel feature includes some rather bland and boring behind the scenes footage, whilst the later half of the feature includes an equally unimpressive blooper reel which is filled with lots of swearing and laughing. I tend to take outtakes with a pinch of salt, with very few of them being particularly funny, and this collection is definitely on the poor side.

There is a complete three minute Deleted Graveyard Scene which does not have any real impact from not being in the film, it just meant that Ben Stiller playing a cameraman straight from film school ended up on the floor of the editing suite. It basically shows Chili showing up on the set of Zimms latest horror flick while Zimm is trying to get Stiller's character to film it how he wants. It's certainly good to see it presented here and just goes to prove that stars can't always guarantee an appearance in a film. But rather being deleted and included with no real explanation, the separate four minute The Graveyard Scene has director Barry Sonnenfeld explaining the reasons behind its removal. Still, it would have been nice to offer a seamless branching option to see for yourself whether the pacing was off the mark.

In a clever money making exercise this Special Edition is timed to be released with the theatrical release of Be Cool. As a result it will come as no surprise to find a Sneak Preview Featurette on the Extras Disc. Fortunately, this preview was certainly enough to get me interested in watching the film, with lots of clips and chats with the stars, especially The Rock who delights in playing a Gay Samoan. If you missed it at the cinema, and you enjoyed Get Shorty, then it will be worth checking out the inevitable DVD release. And one thing is for sure, with the bountiful supply of extras which grace this special edition, it should be a bumper package indeed.

Also included is a Photo Gallery of forty five stills from the film, production and promotions. To save you the monotony of having to select each still they are automatically displayed over a two minute period. I always wonder about the merit of such additions and to be honest there is very little in this selection of interest and it simply ends up being some sub-standard padding material. And finally, where would a special edition be without the Theatrical Trailer?

I must be one of the few people who have never seen this film before and it is now 10 years old, so seeing this Special Edition was a real treat. The performances are great with an excellent supporting cast too including an early role for Sopranos main man James Gondolfini and one of my favourites, the under used Dennis Farina. There are many great scenes and lines. A few favourites are Chili picking up his rental car at the airport and the visit to Zimms office by Bo.

The only quibble with this edition has to be MGM's relentless use of it's awful paper packing. Although the actual design is quite impressive, my paper packed MGM special edition of The Terminator is already starting to look a bit worse for wear. With Warner finally giving in to pressure and dropping its hideous "clipper" packaging, I really do hope that MGM decide to stick to plastic all round in the future. Still, at least the packaging includes that very rare commodity these days - a production booklet.

Get Shorty is not one of the quickest paced films I have seen, but that was not too much of a problem as the characters and dialogue kept things going at nice rate nonetheless. And without giving too much of the plot away, the ending is going to be one you like or hate. Personally, I liked it. Put this together with the good selection of extras, the Special Edition tag is well deserved here.