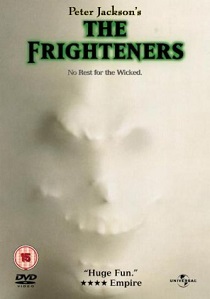 ReviewComedyHorror
Review Article Go back to homepage
The sleepy town of Fairwater is suffering from a spate of mystery deaths. Each of the victims appears to have died from having their hearts crushed from the inside. Only a cheating psychic can solve the mystery, but unfortunately he is one of the prime suspects!
Michael J. Fox, Trini Alvarado, Peter Dobson, Jeffrey Combs, John Astin, Dee Wallace Stone, Jake Busey, Chi McBride
Horror, Comedy
2
1 Hour 45 Minutes
Thank you for supporting DVD365.net when you order using the link(s) below.
Buy DVD
Story

Frank is a psychic who differs from most. He can actually see ghosts and even has some who haunt houses only for him to turn up in a wonderful scam to remove the unwelcome guests. All is going well until he starts seeing numbers etched into peoples foreheads and then one evening he thinks he sees death himself stalking the living.

'Death' turns out to be the mass murderer Johnny Bartlett who had been sent to the electric chair many years ago. He has returned from beyond the grave in an attempt to break the record for the number of murders committed. One of his victims, Ray, misses his chance to go heaven and attempts to get Frank to tell his wife Lucy how much he really loved her. In turn Lucy approaches Frank in an attempt to discover where all the money from his investments went and he finds himself falling in love with her.

During a meeting at a restaurant Frank is the only witness to yet another death and fingers soon point at him as the culprit. A mysterious FBI agent is dispatched to Fairwater in order finally pin the blame for the murders on Frank. To make matters worse Frank can now see another number etched into the forehead of Lucy and, with the assistance of his ghostly friends, must confront the murdering spirit before it is too late.

The picture is terrific, perhaps too good for the CGI's, with most of the action taking place at night and in dimly lit corridors. It is these scenes that make the quality of the film stock and the DVD technology stand out. The surround channels are also used effectively throughout the film.

The special effects must have taken the majority of the budget, and at the time they were at the cutting edge of computer generated graphics. A scene in a house where a ghost moves in a carpet especially stands out, although at times the computer images were all too obvious. Naturally, for a horror style film, there are plenty of moments to make you jump. However, it is Frank's bickering ghostly friends which get all the laughs.

Extras wise, it's all a little sparse with a Theatrical Trailer and some Production Notes in textual form. It is just a pity that the vast amount of information in the production notes could not have been better presented as a directors commentary. It would have been very interesting to hear director Peter Jackson's views on any of the technical problems encountered during filming.

How this film was overlooked at cinema is beyond me. This is a brilliant comedy/horror with which Michael J. Fox excels. However, one actor steals the entire film. The wacky FBI agent Dammers, played splendidly by Jeffrey Combs, is outstanding and you really have to bite your lip to stop laughing and thinking of a certain Fox Mulder. Highly recommended.