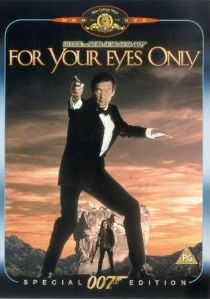 When a British spy ship accidentally hits a mine and sinks near a Warsaw Pact country, the Russians are alerted to the fact that a hi-tech encryption device called an ATAC is on aboard and plans are made for a salvage operation.

The British are all too aware that if the device fell into enemy hands it could order Western submarines to attack friendly countries and shipping. Bond is hastily dispatched to Greece to recover the device before it is too late. As Bond's investigations continue, he meets Melina Havelock who is out for revenge for the murder of her parents. Unknown to her, they were were killed whilst assisting the British in their enquiries.

The sound is average with better use of the surround channels than on the previous re-mastered attempts. Although there are not the huge explosions and massive finale, the surrounds are well used for the ambient sound effects throughout the film. However, the hideous soundtrack spent far too much time in the rear channels and it really started to get on my nerves. The dialogue is clear and easily audible in the centre channel and there is no need to dive for the volume control during the action scenes.

The extras are up to MGM's usual high standards, with the documentary being interesting and informative. There's still the usual trailers and stills gallery plus an interesting number of animated storyboards. With the film being made during the early eighties we not only have awful music during the film, but the addition of a hideous Sheena Easton music video.

From the massive and expensive sets and special effects of the previous Bond films, For Your Eyes Only returns to the classic Bond films of old where the gadgets are kept to a minimum and Bond must do all the spade work to find the baddy.

Although the sets are missing, the locations aren't and we're still treated to some dramatic chases, with the all conquering skiing routines making a welcome comeback. Trouble is, there's no really evil maestro bent on world domination, and without the usual gaggle of henchman this film really does disappoint. However, on the plus side, we do see the return of a more ruthless and compassionate Bond not seen since Connery. Still, if you're aiming for a complete set of films ...