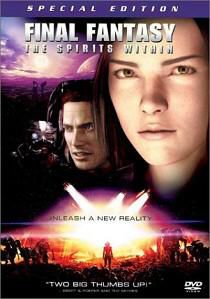 Final Fantasy: The Spirits Within (2001)

It is earth in the not too far distant future and it is a barren wasteland where the remaining human population hide in protected cities from a terrible and unseen enemy. Mankind has been decimated by alien phantoms that crashed landed on the planet in an asteroid. If any person comes in the slightest contact with an alien phantom they are killed and their spirit destroyed.

However, there is hope. The beautiful Dr. Aki Ross and her tutor Dr. Sid have discovered that the energy signatures of eight Earth spirits can cancel out and destroy those of the Phantoms. With the help of Captain Edwards and his squad of battle hardened marines, they must search the globe for the remaining spirits before General Hein convinces the government that the only way of destroying the alien invaders is by attacking their core with orbital laser that may also kill the Earth spirit.

With this being a computer generated film the film has been transfer directly from a digital source and thus the picture should be of a premium quality. With the majority of the film taking place in dark and gloomy locations you don't really get to see just what this film can produce. During the dream sequences you get to see just what a beautifully clear and detailed picture it really is. Together with a continuously high bit-rate throughout the film and, naturally, no signs of artifacting or outlining it is truly demonstration material.

Whilst it was initially claimed that this new form of computer animation would make actors and actresses redundant the animators still have some way to go. Whilst the human body and movements have been pretty much sorted the facial expressions have not. There's no doubt that Aki is worryingly attractive for CGI (she appeared in Maxim magazine in a bikini) and most of budget was spent on her. However, with the exception of Aki and Doctor Sid the expressions can be at best described as wooden. For the time being at least, Arnold Schwarzenegger and company have little to worry about.

I would have liked to have done a gallery section on this film but unfortunately I think that the impressive menu system was slightly too complicated for my Widows DVD Player and it refused to play, and in good old Windows fashion my PC locked up. Oh well, you'll just have to believe me and see the quality of the picture for yourself.

The sound is just as impressive as the picture with some effective use of the surround channels. The producers really do know how to make some noise. There's ambient effects galore and the sound stage bursts into life in all directions during Aki's impressively animated dream sequences. The dialogue is crisp and clear in the centre channel and stereo steerage is equally impressive.

The menu is quite possibly the best yet available on the format. With some specially produced cut scenes and introductions it is truly superb and worth the price of the disc alone. Things get even better on the second disc where Aki effectively walks out of the computer. She then interacts with a number of humans around her before wandering up to a computer monitor to inspect a take from the film.

If you are at all interested in computer animation and how it is made then look no further than here. There is literally hours of footage with audio commentary tracks, documentaries and hidden Easter eggs that offer still more information. There's even an amusing take on the Michael Jackson video 'Thriller' to be found. These people spent over four years creating this film so it was only natural they would have a bit of a play in their spare time. It's just a pity that the 'outtake' section, so loved by Pixar, couldn't be fully rendered rather than being just some blocky pre-rendered shots.

To find those Easter Eggs, choose the Special Features menu followed by the DVD-ROM Content. If you then press Up twice a Japanese symbol will appear on the right. Select this to see some shots of Aki in a bikini. Those computer animators really do need to get out more. From the main menu highlight Play Documentary then press Left then Up to display the Japanese symbol. Select this to view some 3D models of Aki's face. Highlight the Highlights Menu then press Right then Down. Selecting the symbol will show a storyboard of a man and a woman in a restaurant. Go to the Character Files section and highlight Aki. Now use the Down key to highlight the Return symbol. Then press Right followed by Left. A further symbol will appear. Select this to view a brief storyboard sequence. Go to the Vehicle Scale Comparisons section and highlight the first vehicle. Now use the Down key to highlight the Return symbol. Then press Right twice. A further symbol will appear. Selecting this will show some more video footage of the vehicles from the film. On the second page from the Highlights Menu there is a small animated icon at the bottom of the page. Selecting this will show a fully rendered sequence based on a rather famous Michael Jackson video.

The storyline is typically Japanese in its genre and I'm sure the Japanese love it. Unfortunately, for those people who don't play video games and subscribe to its genre, it is somewhat over their heads with a truly wacky storyline. However, if you put this aside you get a remarkable disc that is so bursting full of extras you'll spend hours looking through them - even the Easter Eggs are worthy of investigation too.

Although the film bombed at the cinema it is sure to become a sci-fi classic DVD that graces most fans collection. Even if you don't like the story line you should still consider adding it to your collection if only to watch the superb CGI and listen to an audio treat.