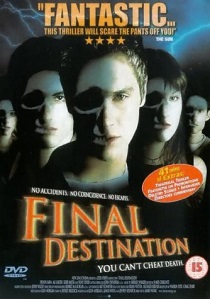 ReviewHorrorThriller
Review Article Go back to homepage
When Alex has a premonition that a flight he's due to depart on will crash, he tells everyone to get off the plane. After leaving the plane, he and six other people witness it explode soon after take off.
Devon Sawa, Ali Larter, Kerr Smith, Kristen Cloke, Daniel Roebuck, Roger Guenveur Smith, Chad Donella, Seann William Scott, Tony Todd
Horror, Suspense/Thriller
2
1 Hour 34 Minutes
Thank you for supporting DVD365.net when you order using the link(s) below.
Buy DVD
Story

Alex and a group of friends are due to fly to France on a school trip. However, whilst Alex is sat on the plane dozing he has a premonition of the plane exploding during takeoff. Naturally, scared by his vision he freaks out and demands to be let off the plane. After a scuffle with the staff, Alex and six other people in the party are ejected from the plane. As they sit in the departure lounge they watch the plane takeoff and explode in a massive ball of flames.

With his suspicious exit from the plane before the disaster, the FBI thinks that Alex had something to do with the crash and monitor his every move. Even his friends become more distant as they question his ability to cheat death and become scared that they might be next. However, each one of the survivors is being killed in bizarre accidents and Alex starts to believe that the reaper is returning to carry out the fate that awaited all of passengers on board flight 180 - trouble is the FBI think he's behind all of the accidents.

With most of the film either taking place at night, or in dark locations, the picture is first class with no artifacting or outlining evident. The colours are bright and well defined with an above average bit-rate throughout the film.

However, it is the soundtrack which is truly remarkable. The rear channels are used extensively throughout the film with a huge amount of ambient effects. This is especially evident during the gory, and extremely amusing, demises of the various cast members. The plane disaster is also an outstanding sound extravaganza. As the plane takes off you hear all the various groans from the plane until it leads up to a huge explosion with massive amounts of room vibrating LFE's. The only complaint I would have was that the dialogue in the centre channel was a little too hard to pick out at times.

The menu system is brilliantly simple. It has haunting images from the film along with some spooky sound effects and each time I accessed the menu I got a different set of images from the film. Most discs only have an animated and scored main menu, however all of the menus here are active and scored, either upon selection or whilst actually viewing the sub-menus.

This region two edition has less extras than its region one edition counterpart, although there are actually more extras than advertised on the back of the box. For a start there are a couple of interesting games. You can test your psychic ability by taking the "Zener Card" test. This is the famous experiment invented in the 1970's where you have to predict the symbol on the card. Until I was disturbed and lost my concentration, I was very worryingly guessing all of the cards correctly.

There's also a death clock where you're asked a few questions about your lifestyle and it estimates when you're going shuffle off this planet down to the last hour and minute - I think I'll be exercising a little bit more! There's two deleted scenes and the original ending which was eventually re-shot after some test screenings. However, it would have been far better if they'd used seamless branching to offer the choice of either ending. A word of warning though - watch the film before you explore the extras otherwise it will total ruin the experience.

With the brilliantly animated menus, cracking extras and let's face it, a damn good tongue in cheek film, you should rush out and buy this film. Just remember to look both ways before you cross the road.