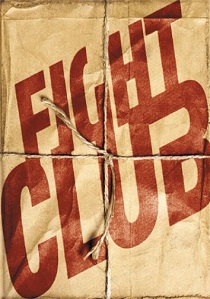 ReviewAdventureBrad Pitt
Review Article Go back to homepage
Jack is an insomniac and its driving him on a fast track to insanity, when he meets a soap salesman called Tyler Durden, they decide to set up the "Fight Club" to channel their pent-up aggression.
Edward Norton, Brad Pitt, Meat Loaf, Zach Grenier, David Andrews, George Maguire, Christina Cabot, Helena Bonham Carter
Action/Adventure
1
2 Hours 19 Minutes
Thank you for supporting DVD365.net when you order using the link(s) below.
Buy DVD
Story

As the concept catches on, other underground Fight Club's appear around America and everything is going fine until eccentric Marla Singer appears on the scene. This is where things start to go downhill placing the insane pair of Jack and Tyler against each other in a battle of out-of-control madness.

This is one intense film! Right from the opening titles you know you're going to be in for a roller coaster ride as you zoom outwards from the inside of a mystery substance which turns out to be a brain. Excellent stuff. The film has the dubious honour of having some of the most violent scenes I have ever seen, with the Angel fight being one of the cases in point.

The poor Angel in question has his face beaten to a pulp with blood and teeth flying everywhere. Indeed the film contains the cut version of this scene which I find amazing since it really is that violent, but if you really want to see it in the entirety you just have to go to the second disk.

As far as acting goes, things are first class with Norton's portrayal of Jack the insomniac being particularly noteworthy, Pitt puts in a good performance and comes over as truly menacing. One thing about Bonham Carter, why does she look like Jo Brand?

Being a high profile DVD doesn't always seem to make the distribution companies sit up and take note, they sometimes decide that the film will sell itself and they don't try. Not the case here! What we get is a THX certified DVD with a sublime picture even in the dark scenes of the underground fights, indeed some scenes are breathtaking in their clarity, but nothing prepares you for the excellence of the sound. During fights you can actually pick out individual voices, and the shouting comes from all speakers making you feel you're right there in the ring of people. Dialogue is of a similarly excellent quality.

Interestingly, Fox obviously want you to get the best out of the disk in both the picture and sound department and to this end they have thoughtfully provided a THX setup screen which allows you to set the contrast and brightness correctly for your TV. You also get the standard white noise (oddly called pink noise here) tests for your sound system.

The extras defy belief, its almost as if Fox have taken every piece of Fight Club information that they have at their massive disposal and crammed it onto the second disk, arranging things perfectly and encompassing it in a nicely animated menu system. The standout things here have to be the multi-angle / multi-commentary production featurettes which are excellent.

The Four Commentary Tracks are accessed from the main menu of the first disk, which obviously contains the film as well. They range in styles and content, but the Bonham Carter one gets a little grating due to her accent being a little bit too posh for my liking. The seventeen (yes, you did read this right!) behind the scenes featurettes, or vignettes as they are called on the disk are all superb. They are split into three categories Production, Visual Effects and On-Location. The On-Location featurette is not of the same standard as the other excellent featurettes. Certainly all the production featurettes have not only multiple camera 'angles' which allow you to see the featurettes subject from the perspective of the different people involved, but also it allows you to mix and match the video subject and the audio commentary, so you could for instance have the video from the location scout and the audio from the principal photography. You can also select a mixed picture which is split vertically. The Visual Effects section allows you to have multiple commentaries, but not the multiple angles of the production featurettes. A bit of a shame, but still a very good selection is available.

There are seven Outtakes and Deleted Scenes available, all of which have a description as to the reason they were removed when selected. As is the norm with these sorts of things, the quality is not very good but it's always interesting to see what hit the cutting room floor. In the case of one scene, Angel's beating, the superb idea of allowing you to see both versions works brilliantly. As the text says when you select it, the cut version is in fact more disturbing because of the reaction of the crowd, it is however one of the most sickening scenes in the film and contains a lot of blood...And I do mean A LOT!

The Storyboard section is contained in the art gallery option, and believe it or not contains the ENTIRE storyboard for the film, yup, you read it right all 246 of them! I suspect this is a first for DVD, never before has all the storyboard been presented to my knowledge. Incidentally, some of the storyboards can be found elsewhere on the disk's special features. The visual effects stills of the General Artwork section are merely a set of photos of various stages of design of the special effects. They range from photos of the sets to some shots of the latex head masks used for the fight scenes. The Paper Street House is a flipbook style display of the building of one of the sets for the film. Costumes and makeup is a storyboard style set of drawings showing the costume style of some of the characters, mainly Tyler Durdan and Marla Singer's looks. Pre-Production paintings describe the content of this section perfectly, there are over fifty of them and they are all beautifully realised if a little bland in colour. The Brain-Ride map section gives over thirty storyboard style shots of the brain-ride map which is shown in the opening credits and the visual effects featurette. Fairly uninspiring stuff, but only meant as filler.

The disk contains two trailers, one is a Theatrical Teaser and one is a full blown Theatrical Trailer. There is also a small section which details the eight rules of the fight club, the first rule being, Never talk about Fight Club. Also here are seventeen TV Spots from around the world, all are short spurts of the film doing just enough to tease the audience including, interestingly three Spanish ones, which are all subtitled. The Public Service Annoucements are interesting in the fact that they appear to be a replacement for the pre-film message you get in cinemas, telling you to switch of mobile phones etc. Pitt and Norton appear to have done one each, with Norton's being actually quite comical at the end, making a reference to people not being allowed to touch you in 'your bathing suit area'. The music video is interesting in the fact that the band is not stated, however I would expect that the band in question is The Dust Brothers that are listed in the credits. It's quite a racy dance/hip-hop tune with talking over the top, very similar in style to a lot of Underworld's material.

The Internet Spots appear to be short trailers of the film, however what relevance they have to the internet is not stated, I suspect that they were originally in Realvideo or some other internet friendly video form and were used as downloads from the official site. The Lobby Cards/Advertising appear to be a large number of posters used mainly for promotion. They range from pictures of the cast to strange images of a bar of soap with various slogans above like 'Wash That Blood Right Out Of Your Hair'. The Press Kit is an oddity, its a mock catalogue of various Fight Club merchandise. It is however obviously a spoof, as most items are accompanied with text. Interestingly, although most is unreadable, there is a hidden option below the promotional gallery on the publicity material section (look out for the smiley face!) which gives you a chance to read it for yourself.

The Edward Norton Interview is a text based interview with Norton which spans twenty six small pages, it contains some interesting questions including coverage of the Columbine High School incident and the effect the film may have had on society. It would appear to by a transcript of an internet interview, but is nonetheless quite good. The Stills section contains a number of stills taken from and during the making of the film, what however is amazing is the number of stills... One Hundred and Fifty Eight, and yes I did count them!

Okay, its not strictly speaking glossy, but the accompanying booklet it is nonetheless an informative piece of writing. Titled How To Start a Fight, it provides insights from various people involved in the film and the book rather than general details of the film. The original author of the book, Chuck Palahniuk tells of the stories behind the book, whereas others, generally reviewers from various American newspapers tell of how they loved or hated the film. Yes, some did hate it and bravely the book does go over this point with Kenneth Turan of the L.A. Times saying '....A witless mishmash of whiny, infantile philosophising and bone-crunching violence that actually thinks it's saying something of significance'...Not everyone liked it.

One thing to 'beware of' is when you insert the first disk, you get the usual warnings and then the menu appears...Why warn you? Because the menu is so cleverly displayed that I thought my player/television had broken! A brilliant, intense experience that no collection should be without, as long as you can stomach the violent nature of the film. Just go out and buy it.