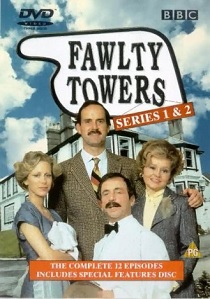 In deepest (and some say darkest) Torquay is the Fawlty Towers hotel, proprietors Basil and Sybil Fawlty. However, Basil hates his guests with a passion and he's definitely in the wrong business. A career in British Rail customer services would be more appropriate for a man of his talents.

Under the thumb from his dominating wife, commonly known as the 'Little Piranha' poor Basil is a heart attack just waiting to happen. His working day normally goes from one blunder to another, and usually involves the poor put upon waiter Manuel (he's from Barcelona you know).

The six episodes of each series, listed below, are contained on the first disc whilst the extras are on the second. These include interviews with the cast, although they claim to be 'exclusive' I believe they were initially created for the video box-set release a few years back, whilst there are some outtakes on the second series. The directors commentary is also reasonable enough, although the soundtrack is missing so you can't hear the dialogue in the background at the same time as the commentary.

The picture has been remastered so it is eminently better than the original video versions. However, the age of the film stock has taken its toll resulting in a washed out and occasionally grainy picture. The bit-rate is above average with no signs of artifacting and for a the age of the television series there is basically nothing wrong with the overall quality.

With the series created and shown in the mid-seventies you can't be expecting anything spectacular from the sound department, and if you were then you're going to be sadly disappointed. The sound is only presented in mono but never-the-less the dialogue and continual chaos is clearly audible throughout.

Fawlty Towers has, rightly, been hailed as one of the greatest television sitcoms ever. It is easy to see why with every viewing still managing to crack you up laughing. The only thing that's dated are the clothes and the references to the political climate at the time. The jokes are arguably as fresh today as they were 25 years ago and that must surely go down to the writing talent of John Cleese and Connie Booth.

What is more worrying about the series is that John Cleese based his character on (apparently) an actual Torbay hotelier called Donald Sinclair, although a lot of press recently claimed that his wife was, naturally, upset by the accusations and that her husband was the perfect gentleman. Cleese and his fellow Monty Python team supposedly met him whilst filming and that he was so rude that the rest of the Python team checked out of the hotel leaving Cleese to observe Sinclair's behaviour.

Although only twelve episodes were created, you'll need to buy the the other disc for the remaining episodes, each one is just as good as the other and it is hard to find a weak one. Its just as hard to find the best, although my personal favourite, and no-doubt the same as thousands of others, is 'The Germans'.