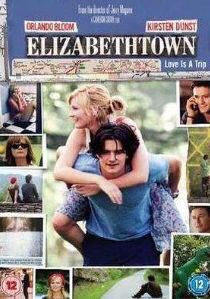 When the young and promising Drew Baylor causes the Oregon shoe company he works for to lose hundreds of millions of dollars (well, let's round it up to a cool one billion dollars) with a disaster of a shoe design, he is rather unsurprisingly fired for his expensive mistake. And with no job to go to, his attractive trophy girlfriend Ellen soon dumps him for his replacement. Not use to such abject failure, Drew decides to end it all by committing suicide. Arriving back home he throws all of his possessions into the garbage and proceeds to remodel his exercise machine into something rather more gruesome by removing the handlebar and duct-taping a knife to it. But just as he prepares himself to meet his maker his sister rings with news of the death of his father in Elizabethtown.

Because Drew is the most successful and responsible one in the family, Drew's mother decides to volunteer him to go to Elizabethtown to deal with the funeral arrangements. So, given a new purpose in life he heads to the airport to catch the red-eye flight to Louisville. Once onboard he soon discovers that he's the only male passenger on the flight and, as a result, gets plenty of attention from stewardess Claire Colburn. With her incessant talking and quirky stories throughout the flight he finds it hard to think, let alone sleep. But upon arriving at their destination she presents him with some hand drawn maps and a phone number where she can be reached. Thankful to get away from her, he heads out to Elizabethtown and to a group of relatives he's not see for years.

Once safely in Elizabethtown, Drew is introduced to some fairly weird family characters and customers. However, the whole town is in total admiration for this legendary shoe designer. It's just a pity they don't know the full story - yet. Never the less, amongst all of these strange customs his thoughts return to the kooky Claire and he finally decides to give her a call. It's a call that last throughout the entire evening and into the early morning where they finally decide to meet up in a quiet and scenic location to watch the sunrise. Slowly but surely, Drew and Claire's relationship blooms and this all helps Drew see the many positive sides to life. Still, there's still that funeral to attend to.

The picture is bright and colourful with a high level of detail throughout. With plenty of scenes of contrasting colours and detail it manages to serve its purpose well, and with relative ease. Never the less, there is the occasional problem with grain and excessive amounts of contrast, especially during some of the darker scenes. The black levels are also not the best you're going to see on DVD. Fortunately, the picture remains free from signs of artifacting and outlining and given that it is such a recent release, the transfer is free from dust scratches and other forms of print damage.

Given the genre of the film the 448 Kbps Dolby Digital 5.1 soundtrack was never expected to be anything special. However, it's actually rather good and proceedings are more than covered with a rather good musical score that accompanies many sections of the film. The dialogue heavy soundtrack is crisp and clear in the centre channel whilst the front stereo and surround channels are used a fair amount by the ambient and directional effects. The sound highlights would have to be the two musical sections of the film - Drew's road trip (and interesting trip through America it is too) with a CD prepared by Claire and the rather wacky remembrance dinner. Sure, there's more to a film that the musical score, but in the case of Elizabethtown it really helped to carry the film along nicely.

The main menu is scored and animated with various cut scenes from the film whilst the Special Features and Scene Selection menus are static and silent affairs. Although the overall menu design is good and in keeping with the theme of the film, the extras are rather pointlessly spilt over two menus. Extras wise, it's all a bit of a disappointment really with nothing really of note.

The two minute Training Wheels featurette is set to some rather poor quality sounding music and essentially consists of some camcorder footage of the various cast members during the rehearsals. With no dialogue or apparent purpose for this featurette, it left me wondering just what it was suppose to be getting across. The three minute Meet the Crew featurette is again set to music, but much better sounding than the previous featurette, but yet again contains no dialogue and the camcorder simply points at one of the cast members and gives their name and job title as they go about their business. There's a bit of behind-the-scenes footage, but it's very minimal and, as a consequence, hardly the most interesting of featurettes. Still, at least you can put a face to the crew and you get to see some of the minions who wouldn't normally get a look in come DVD extras time.

Next up are the two Extended Scenes. This consists of a three and a half minute, and frankly rather pointlessly extended, Rusty Learning to Listen Part 8 clip which was used to placate the children, and the seven minute Hanging with Russell in Memphis scene. This extended scene is more like a behind-the-scenes featurette which is then interjected with an overly long version of the scene used in the film. I guess Russell was simply left to waffle and the director chopped out the bits he wanted to use.

Next is a rather extensive Photo Gallery which is split into Behind the Scenes, Mercury, Drew Baylor, Mitch, Hollie, Drew and Heather : The Balyors, Claire Colburn, Drew and Claire, The Memorial, The Funeral and The Road Trip sections. I have no idea how many photographs there are, but there must be hundreds, but I soon got bored flipping my way through this vast collection and I would have much preferred a proper behind-the-scenes featurette with the cast and crew. Things are rounded off with two Theatrical Trailers for the film called Bad Day and Drew.

I've heard many complaints about Elizabethtown and the fact that Orlando Bloom seems to be so bored and unconvincing in the role. The Internet is full of comments saying that Garden State is much better and there appears to be a general apathy towards the film from the various big time reviewers and publications. However, whilst I've not seen Garden State I am still going to have to stick up for Elizabethtown and say that, in my opinion, Orlando is playing his role perfectly and that you shouldn't always believe what you read in the press. After all, his father has just died and he's managed to loose his job and his firm nearly a $1 billion dollars. Need less to say, you'd hardly be the happiest and go getting of chaps now would you?

My only real criticism of the film would be that it's probably a shade too long and it did sort of get a bit lost in the middle. However, this isn't really a complaint as such, as I found the film extremely involving and the time simply flew by. My only doubts are for any viewers that may find that the film plays out a little too slow. Never the less, the one thing our favourite shiny little disc has over the cinema is the wonder that is known as the Pause button.

The film may not appeal to all, and the rather lacklustre extras don't really help matters, but Elizabethtown is one of those films that deserves a chance purchase, or failing that, a definite rental. You may well be surprised by the results, and you don't have to be a fan of Orlando Bloom or Kirsten Dunst to enjoy it.