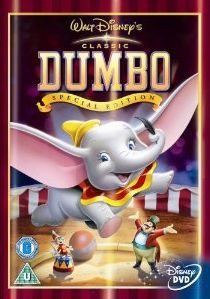 ReviewAnimationFamily
Review Article Go back to homepage
It's breeding time at the circus and the stork has just delivered a baby elephant to Mrs Jumbo. However, the little fellow is a little more different than most other elephants - he's got enormous ears.
Edward Brophy, Sterling Holloway, Verna Felton, Cliff Edwards, Herman Bing
Animation, Family
2
1 Hour 4 Minutes
Thank you for supporting DVD365.net when you order using the link(s) below.
Buy DVD
Story

It's breeding time at the travel circus, and rather than showing the "shocking" realities of such things to young and impressionable minds, the storks are delivering their bundles of joy to the animals of the circus. With all of the other animals receiving their bundles, the expectant Mrs Jumbo is left waiting for hers. But it's not long before the stork arrives and the newly christened Jumbo Junior is charming the other elephants and his besotted mother. However, that is until Jumbo sneezes and his massive ears are unfurled to the shocked elephant matriarch.

The matriarch re-christens Jumbo to Dumbo and he quickly becomes a figure of fun, especially as his ears keep becoming unfurled, causing him to get tangled up in them and tripping him up. However, poor old Dumbo's life gets even worse when, after much poking and teasing by the public, his mother's protective instincts kick in and she runs amok amongst the crowd - resulting in her being locked up as a "mad elephant" and away from her beloved little elephant. With no mother to nurture him and only ridicule from every corner on a daily basis, poor old Dumbo is left lonely and depressed.

However, no one at the circus had accounted for the one and only Timothy Mouse, the would be theatrical agent and the one person who befriends Dumbo and tempts him out of his shell with a peanut. Although Dumbo has a part in the circus, it's as a circus clown at the receiving end of pretty much every custard pie and bucket of water going. Everything would be so much better if Dumbo had a talent that would truly impress the circus audiences. And after the pair accidentally become rather inebriated, and even seeing those much talked about pink elephants, it doesn't take long for Timothy to realise that Dumbo's ears may well have been used for something completed out of character for a pachyderm. Stardom beckons!

It's hard to believe that the film first appeared in 1941 - that's over sixty years ago. Naturally, the print has undergone some serious cleaning up, and the results from this fullscreen presentation are nothing short of remarkable - with a picture that is rich and vibrant with a huge amount of detail throughout. The earlier Disney films also tended to go slightly overboard with the amount of colours, although that could have simply been down to the way the cells were created for the animation, but here everything is kept perfectly in check with no colour bleeding or signs of outlining. The print is also free from any signs of dust specks and other forms of print damage. It's the perfect example of how to go about preserving an important film for future generations.

As with the recent release of the Disney version of Robin Hood here is an all-new Dolby Digital 5.1 448 Kbps soundtrack. Whilst it will be a hundred times better than the original mono track - which unfortunately I'll have to assume because it's yet another Disney DVD release where it has been omitted - it's actually nothing to get all excited about. In fact, with the sound locked in the centre channel throughout the entire film, you could do away with your fancy and expensive surround system. However, to be fair to the folks at Disney, the dialogue is reasonably crisp and clear in the centre channel and it at least attempts to bring the film more to life than a mono track with the occasional ambient effect finding its way to the rear channels. There's even room on the disc for a set of 5.1 Italian and Spanish soundtracks too - albeit at a lower a bitrate than the English track.

With the disc housed in an impressive holographic slipcase, before you get to the main menu there's a number of trailers for the rather good looking CGI animated film Ratatouille plus others for Tinkerbell and other Disney titles in the Gold Collection. Fortunately, if you get bored with it all you can skip straight to the main menu with a press of the Menu button on your remote. The main menu itself is scored (which becomes rather annoying after a while!) and pleasantly animated in 3D with a flying Dumbo - even if the menu transition effects are a little too long winded for my liking. Extras wise, they're all child friendly and more likely to appeal to the younger end of the child market. Never the less, there's a bit of something for everyone.

First up is the Music and More section with the four minute Baby Be Mine music video performed by Jim Brickman and Kassie DePaiva. It's a rather cheap affair with the two musicians sat in a studio singing with the occasional clip from the film. Whilst it's a rather nice and mellow tune, I'm still trying to work out just why this video is here - is it a special for the DVD, shameless cash in or some celebration of the film? Unfortunately, we're not told. Next up is the Karaoke feature of Sing Along Song - Look Out For Mr. Stork. I wouldn't say this was the most memorable song from the film - that being When I See An Elephant Fly, so using this song is a bit of a puzzler.

Next up is the Games and Activities section. The My First Circus game will have you spinning a wheel to trying to identify the circus animal. Get it right and a narrator will give you some information about the animal - all accompanied with a few helpful clips from other Disney films. Get it wrong and you get another go. It's all rather simple stuff, but it's something that will interest the youngest member of the family, as will the very simple, and fairly creepy, DVD Storybook : Dumbo's Big Discovery which allows you to read by yourself or interact with the film.

Tucked away in the The Backstage Disney section is a full length Audio Commentary with animation historian John Canemaker. Unfortunately, this is a rather daft place to put such a thing I as never even knew there was a commentary track until I was looking through the extras for this review. The commentary itself is a very interesting one (even if it sounds like he's reading from a script most of the time) and it contains none-stop information on the animation, the in jokes, the story, the actors behind the voices and even the real life events of the time. In the fourteen minute Celebrating Dumbo featurette, various critics, directors and animators all talk about how wonderful the story and film is - including the true remark that after Mickey and Minnie mouse, Dumbo is the most recognisable Disney character of all time. Whilst it's most definitely just one big backslapping exercise from the film industry, their comments and remarks are completely justified and this featurette is a welcome addition to the disc.

Whenever a Disney animated film was shown on television, Walt Disney himself usually made a brief introduction about the film the audience were about to watch. The one minute black-and-white Walt Disney TV Introduction does just that and it's always great to see the late-great Walt Disney himself - especially for the newer generations who have no idea of just who the founder of the great Disney institution was. Next up is the Dumbo Art Gallery that offers seven different gallery sections - Concept Art, Character Development, Pink Elephants, Story Development, Roustabouts, Behind the Scenes and Attractions. There are pictures galore here, and although you have to scroll through them all, each gallery is shown as an overview which then allows an individual picture of interest to be selected and shown as full screen. It's certainly a novel idea when it comes to showing hundreds of stills.

The extras come to a close with the Bonus Shorts section of silly symphony cartoons of Elmer Elephant and The Flying Mouse. Running for eight minutes each, they show a cartoon age that is well and truly gone, replaced with CGI animated cartoons of alien invaders and strange mutants. Blimey. I really am starting to sound old.

Along with the likes of Snow White and Bambi, Dumbo must be counted as one of Disney's greatest ever full-length animated masterpieces and was Disney's most profitable film from the 1940s. I honestly don't think that even the likes of The Lion King or Aladdin are a patch on Disney's films of old where the animation was strictly cell based without a hint of a computer. However, tastes and opinions have changed greatly over the years, and if a film like Dumbo was ever released today I'm sure it would be greeted with howls of disgust at the animal cruelty - even if it was an animated film. Still, I have to admit that I would be one of those people protesting as I'm sure those happily caged cartoon animals would have been far from such, although I guess I'm being a little too pedantic here.

Never the less, even after all of these years, Dumbo still manages to be a heart-warming and inspirational with a message that everyone is unique - not bad for a time where to be "different" was frowned upon and a freak show or padded cell was a more "appropriate" proposition in those picture perfect American suburbs of old. The film also includes one of Disney's most famous of songs When I See An Elephant Fly and let's not forget that rather wonderful Pink Elephant's Parade. How many of those have you seen over the years after a trip to the pub?!

Although this is a film aimed at a younger audience I suspect that they will be the least interested with this classic piece of animation. Even though people who remember the original release of Dumbo will now be in the minority, the thirty-something generation will enjoy this most heart warming of films the most. It's all a bit nostalgic and, even with the child friendly extras, it's one of the few Disney titles to be cherished and enjoyed over and over again. Highly recommended.