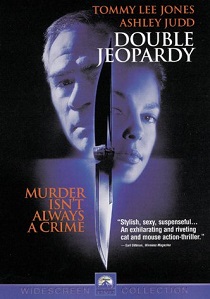 ReviewThrillerCrime
Review Article Go back to homepage
A happily married woman is convicted of the murder of her husband. Languishing in prison for a crime she didn't commit she discovers that her husband is far from being dead and plots murderous revenge.
Tommy Lee Jones, Ashley Judd, Jay Brazeau, Bruce Greenwood, John MacLaren, Ed Evanko, Annabeth Gish
Suspense/Thriller, Crime
1
1 Hour 45 Minutes
Thank you for supporting DVD365.net when you order using the link(s) below.
Buy DVD
Story

Libby Parsons is a happily married woman, she has a rich husband and all seems great. One day, her doting husband buys her a yacht and they go off together. That night she goes to bed on the yacht and when she wakes up, her husband is gone and there's blood everywhere. Libby ends up being convicted of her husbands murder and goes to jail.

Whilst in jail, Libby protests her innocence, but it falls on deaf ears. For the first few months Angie (the nanny) visits with Libby's son Matty, but soon they stop coming and Libby doesn't know where they've gone, frantic phone calls to her old house prove fruitless. Libby eventually tracks Angie down from prison and calls her, and this is when she accidentally discovers that her husband has faked his death and framed Libby for the murder.

The film revolves around Libby trying to track down her husband when she is released on parole, the premise being that she can kill her husband because you cannot be convicted of the same crime twice, so she's in the clear. To find her husband, she has to skip town and break her parole, to which she is chased by Travis Lehman her parole officer.

Picture quality is on the whole good with the underwater scenes being particularly impressive. There is a slight blurring around the edges in some scenes, but don't let that worry you because you really need to look.

Sound is terrible...Well, it is, until you realise that the disc defaults to Pro-Logic which is very annoying. Once set to 5.1 things are a great deal different with some good use of surround, look out for the jeep crashing on the beach and the thunder scenes.

As for extras, they may as well have not bothered. In my opinion, behind the scenes featurettes are almost always dodgy interviews with the cast...Not here...Oh no...We get the trailer tacked on the front too! Waste of space...Other than Ashley Judd looking gorgeous on the featurette.

If you're thinking this sounds a bit like Jones' earlier The Fugitive you'd be right, certainly you'll be thinking this by the end of the film because the similarities get even closer. Not that it's a bad film, because it's not. I really enjoyed this film, and lets face it Ashley Judd is a damn sight better looking than Harrison Ford!

To sum up then, a good film with a mostly good picture and the odd good use of surround. Close, but no cigar.