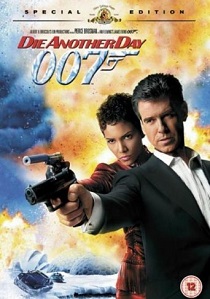 ReviewAdventure
Review Article Go back to homepage
Bond is back for his twentieth outing, and this time it could be his last. His mission has been compromised and he's prisoner in a North Korean camp with guards who like to dish out cold water and electric shock treatment.
Pierce Brosnan, Halle Berry, Toby Stephens, Rosamund Pike, Rick Yune, Judi Dench, John Cleese, Michael Madsen, Will Yun Lee, Kenneth Tsang, Emilio Echevarría, Colin Salmon, Samantha Bond
Action/Adventure
2
2 Hours 7 Minutes
Thank you for supporting DVD365.net when you order using the link(s) below.
Buy DVD
Story

When Bond surfs into North Korea in search of buyers of African war diamonds, he has no reason to suspect that won't be another mission for Queen and country. However, his identity has been compromised and, yet again, Bond soon finds himself fighting for his life. Escaping in a military hovercraft he battles his way across the minefields separating the two Korean peninsulas and disposing of the baddies as he goes.

However, even the best escape plans have flaws and Bond is finally captured and tortured. In prison for over 12 months he soon finds himself bundled into the back of a military vehicle and taken to a mist covered bridge. Fearing the worse, he gets ready to receive a bullet in the back only to be told to walk across the bridge. Bond is not to be executed but is part of a prisoner exchange with the North Korean terrorist Zao.

Mind you, the prisoner trade has only been performed because the Americans believe he's cracked under torture and revealed the identity of a number of agents who have recently been killed. With his "00" status revoked by his own government, Bond has no other choice but to escape M16's clutches and clear his name by tracking down the real mole and preventing a war between North and South Korea.

The picture is bright and colourful with a high level of detail. So much so that it can become a little embarrassing at times with the DVD technology highlighting some glaringly obvious CGI effects. Never the less, the picture is free from signs of pixelisation or artifacting and the bit rate remains high throughout the film. However, the print is far from perfect with a number of dust scratches and other picture imperfections. Quite how this is the case for a modern, high budget and high profile film is beyond me.

In a first for a Bond film, a DTS soundtrack is available along with the Dolby Digital EX version. Both are impressive with a huge array of surround effects and massive LFE's throughout the film. You certainly know its an action film from the moment the film starts, and as long as your neighbours are deaf or away on holiday, you'll experience one of the most dynamic soundtracks available on DVD today.

Although I normally opt for the DTS soundtrack I would have to say that in this case the Dolby Digital should be the preferred choice. The reason for this is that the DTS soundtrack is just too loud for an action film, especially when it comes to the lower effect channel. Boy, I've never known my subwoofer to shake the room as much as it did during this film. There is such as thing as too much bass you know!

MGM have a habit of treating the 007 menu systems well, and Die Another Day is certainly no exception to the rule. This menu system is impressively animated at most levels, if a little slow on the over elaborate introductions at times, and scored with the impressive soundtrack.

Again, as with the previous Bond outings on DVD we've been treated to a veritable feast of goodies, so much so that in a first for Bond we've got two discs to explore. Mind you, only one disc is full to the brim with extra as the main feature disc has to accommodate two capacity sucking Dolby Digital EX and DTS-ES soundtrack.

Mind you, there's still plenty to accompany the main film with two audio commentaries, trivia information super imposed on the screen and behind the scenes featurettes. Unfortunately, once initiated it is a bit of a pain to disable, or in fact easily enable, the trivia information - it can be a bit of an information overload at times. The audio commentary with Brosnan is the usual "star" affair - bland, boring and only only done for some extras few dollars (you know, to pay for that new helicopter). As with previous Bond yak tracks, the better of the two is the one from the director and producer.

The second disc is where all the action is. The highlight of the extras must be the behind the scenes featurettes on the making of the film. Running at over 70 minutes, it includes interviews with the cast and crew and their troubles with the exotic locations (Aldershot no less) and mother nature. Another lengthy, and exclusive to the region two edition of the disc, is a 52 minute documentary of the script to screen process, although some of the interviews and insights are just a rehash of the behind the scenes featurettes.

If that's not enough for you then there's storyboards, multi-angle deconstructions and an image database boasting over 200 images from the film. Also, if you've ever wondered how the opening credits are made, then wonder no more as there's an very interesting featurette explaining all. Its all rounded off with the usual trailers and Madonna music video. Many people criticised the Madonna track, but I actually liked it and place it as one of the best Bond tunes to date.

I was actually ready to bash MGM over their artwork design and how they had wrecked the many Bond fans collections of DVDs. However, listed on the back of the box with the extras I noticed a "Double Sided Collector's Sleeve" item. Interested, I pulled out the sleeve and hey-presto a sleeve to compliment the Bond collector's set and it even matched. Well done MGM, extra points awarded!

Whilst the packing and presentation of Die Another Day is a credit to MGM, and the best Bond presentation to date, the film is actually rather poor. The gadgets and gizmos have gone too far and upon seeing the "invisible" car in the cinema I placed head in hands and groaned. Even my ageing father, who is still coming to terms with the invention of the wheel, thought that the gadgets had gone too far this time. However, its not all down hill as the gritty opening scenes of Bond's torture at the hands of the North Koreans was just great, and indeed it was the very character Ian Fleming created.

What surprised me the most about this film was that the acting was not the best. Naturally, Pierce Brosnan is his usual best, and in my opinion the best bond to date, but just how Halle Berry won an Oscar for her acting in Monsters Ball defeats me. She spends most of the film looking confused, out of place and struggling with the innuendos. A very poor showing indeed. However, this is nothing when compared to Madonna's little turn. Madge, stick with the singing as you positively stink at acting.

Also, I just couldn't take Toby Stephens' character Gustav Graves seriously. Why? Well, with his many sneers and other facial impressions I just kept seeing Alan Rickman's character Alan B'stard (although this observation may be a little puzzling to those visitors outside of the UK)

For some reason the producers decided to spend most of the film making homage's to the other Bond films. From Jinx emerging from the sea ala Ursula Andress in Dr. No to Gustav Graves arrival in London via parachute ala The Spy Who Loved Me. If you're quick enough you spot just about them all. Even Q gets into the act with a quick tour around the Q branch archives.