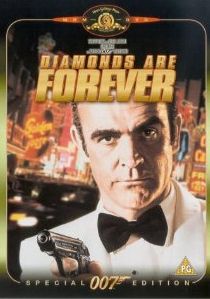 When shipments of diamonds start disappearing, along with a mounting body count, the British Government suspects that there smuggling ring operating. Bond is called in to investigate what they believe to be a simple smuggling operation, however he soon uncovers the extent of the problem and finds himself in America where millionaire casino owner Willard Whyte is the prime suspect.

When the casino owner turns out to be Bond's arch nemesis Ernst Stavro Blofeld the real reason behind the diamond smuggling operation is revealed. Blofeld is hatching another plot to hold the world the ransom with a laser weapon capable of destroying cities from outer-space and only Bond can save the day.

In the past, MGM have managed to produce a superb set of digitally re-mastered pictures. Although this film still offers an above average bit-rate, and a crisp and clear picture definition that only DVD can offer, there are still plenty of picture imperfections with dusk specks and whiskers. There are even occasions when pixelisation is visible in the background. For all the effort MGM have put into the previous Bond films this is a real disappointment.

Yet again, the major disappointment with this film is the mono sound track. With the plentiful explosions and fight scenes it would have really benefited from a re-mastered 5.1 soundtrack. With all of the resources available to MGM I'm sure they could have managed to produce a 5.1 soundtrack, after all other companies have managed it in the past.

Still, MGM have managed to dig up plenty of interesting extras, with the deleted scenes being of particular interest. There is also a wonderfully animated menu system which is probably the best one of the series to date, and let's not forget that wonderful soundtrack.

After the mediocre reception given to replacement bond George Lazenby in Her Majesty's Secret Service, Sean Connery was enticed back to the fold with a briefcase brimming with the folding stuff and a percentage of the profits. Although this is a good film with plenty of action, superb baddies and the usual nail biting finale, it has a definite taste of Americanisation to it. Perhaps all those bulging wallets in Hollywood were just too tempting for the Bond franchise to turn down.