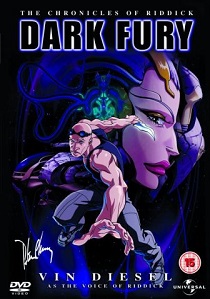 No sooner have they escaped from the planet in Pitch Black, Riddick and the remaining survivors of the nightmare find their shuttle craft being intercepted by a group of bounty hunters looking for prey. It doesn't take long for their scanners to detect that the ship contains Riddick, plus the handsome reward to go with it, but with Riddick's survival instinct kicking in, the scanners are no longer detecting life signs. Left with no other choice, the bounty hunters haul the ship into their docking station and send a group mercenaries to meet him. Need less to say, they've not put out the buntings for his arrival, and armed to the teeth they attempt to break into the ship.

But it doesn't take long for Riddick to break out of the shuttle and dispatch some summary justice on the mercenaries. But heavily out numbered it is only a matter of time before he is captured and lead to the female leader of the bounty hunters. However, this bounty hunter has no intention of collecting the reward and she would rather have him mounted on a plinth in a horrific form of stasis with a host of other criminals who were once the most wanted men and women in the universe.

But before claiming her prize she wants to see Riddick in action, so he's introduced to some extremely unfriendly creatures. Naturally, it doesn't take him long to dispatch the creatures and make his escape. But after witnessing what Riddick can do in the shuttle bay first hand, the female leader decides to take no changes and mobilises just about every member and creature in the ships arsenal to stop him escaping. This escape may just be a little trickier than the last.

The animation has a good balance between CGI and the traditional animation methods and by portraying Dark Fury as a animated short the producers of The Chronicles of Riddick have managed to bring to life this strange world without having to extend the feature film or employ more fancy CGI effects. Picture wise, the colours are rich and vibrant and offer a high level of detail throughout. Even for 2D animation the textures manage to be reasonably defined and, even though the bit-rate fluctuates wildly, there is little or no sign of either artifacting or outlining. All in all its a good all round performance, but given the subject matter I would have not expected anything else.

It's bad enough trying to understand what Vin Diesel is saying at the best of times so when you only have animated lips for assistance things can only get worse. Fortunately, the Digital 384 Kbps is clear enough and it offers some clear and precise dialogue in the centre and front channels without going over the top with dramatic scores or effects. There is the occasional use of the surround channels, but its nothing spectacular, whilst the LFE channel is rarely tested. It's a shame really as I'm sure it would have benefited immensely from a more involving soundtrack, although budget limitations may have put an end to anything more adventurous.

The main menu is reasonably animated and scored with a few cut scenes from the animated short with the extras presented on another menu. However, don't dwell too long on the menus to scratch your nose or make a brew as it will soon timeout and start playing the film. I suppose you could argue that this is a handy "screen saver" feature, but I do find discs that do this extremely irritating. Never the less, fans of the anime genre are still sure to enjoy the extras with some interesting background information on both the The Chronicles of Riddick feature film and the Dark Fury short.

Highlight of the extras has to be the Dark Fury Animatic where you can watch the entire animated feature in storyboard form along with the main soundtrack. Whilst this may not be interesting to some, it certainly highlights the amount of time and effort spent in creating storyboard sequences. Next up is movie crossover and the Making Of The Chronicles of Riddick feature with interviews with directors David Twohy and Peter Chung, author Brett Matthews and Vin Diesel himself. It helps to explain some of the storyline and contains a number of clips from the feature film (with impressive looking special effects) which are then referenced back to the animation.

Following on from the Making Of is an additional interview with Peter Chung and a trip into his mind and the various philosophies behind his animation. With talent like Peter's, it's no wonder that anime, and Japan in general, is the source of so many good film ideas. The A View into the Light feature has a few more clips from the sequel (plus yet more impressive special effects) and interviews with the director and Vin Diesel. Rounding things of is a trailer for an animated version of Van Helsing (it just had to happen really didn't it) plus a trailer for the inevitable video game. These extras certainly add value to this release and let's just hope they aren't regurgitated on the DVD release of The Chronicles of Riddick.

Released on DVD to coincide with the theatrical release of Chronicles of Riddick, it is in a similar vein to the The Animatrix which accompanied the release of The Matrix Reloaded. Unfortunately, even with the impressive set of extras, the Matrix's half-sister still has more substance to it. Plus, when you consider that a special edition of Pitch Black is also due for release around the same time you have to question the motives behind this separate release. Quite simply, why wasn't this animated short included in the special edition Pitch Black?

Although anime fans are sure to enjoy this release, with some reasonable animation and a set of extras to bolster the all important value of the package, Universal have gone and shot themselves in the foot by seriously narrowing its marketing potential. But to be fair to them, the cost of adding this as an additional disc to the new Pitch Black release may have been too prohibitive for limited gain. But saying that, by releasing it as a separate disc it will probably have actually harmed sales of both titles. This really was a missed opportunity to make the new release of Pitch Black a corking collector's edition, yet instead it turns out to be a rather embarrassingly implied cash in.