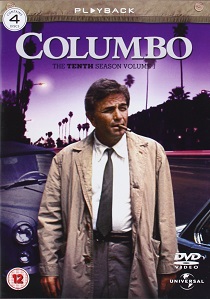 ReviewTV SeriesCrime
Review Article Go back to homepage
That famous rain coat and equally famous, but clapped out, Peugeot 403 Cabriolet has been rolled out for a tenth time. It can only mean one thing - Lieutenant Columbo is back to repeat his famous catchphrase "Just one more thing..."
Peter Falk, George Hamilton, Faye Danaway, William Shatner, Tyne Daly, Rip Torn
Crime, Television
2
11 Hours 56 Minutes
Buy DVD
Story

One of the most famous detectives to ever hit our television screens, Colombo has become an iconic character in popular culture that, like the equally iconic Kojak with his famous lollypops, has more-or-less single-handily kept the rain coat industry going. Whether it's hot, cold, raining or sunny, Columbo is forever clad in his tatty raincoat, chomping on a cigar and driving a clapped out car that draws more laughs than a comedy store packed full of the latest talent.

The dishevelled Columbo seems as scatterbrained as his shabby appearance would suggest but, unlike the criminals he's sent to investigate, don't let his appearance lure you into a false sense of security and give you the idea that you're about to get away with the crime. Even when it appears that his investigation is going nowhere and the criminal (always revealed at the beginning of the show) looks likely to get away with murder, Columbo's keen mind is continually analysing every little detail that the murderer thought they'd dealt with, until he finally reveals just how the crime was committed to the now sweating perpetrator.

In series ten, Columbo continues to thwart the criminals with this box set including the critically acclaimed feature length episodes such as Columbo and the Murder of a Rock Star which received Emmy® and Golden Globe® nominations along with legendary actor George Hamilton in Columbo: 'Caution Murder Can Be Hazardous to Your Health'. Season ten also includes the feature length episodes Columbo Goes To College, Death Hits the Jackpot, No Time to Die, A Bird in the Hand, It's All In The Game and Butterfly in Shades of Grey.

Given the age of the series sourcing a good quality transfer might be a bit of an issue. Fortunately, with these episodes emanating from the 90s the general quality of the transfer is good. There's still the occasional dust speck or picture imperfection, but on the whole it's only the awful fashions of the era that will make you cringe. Whilst it's still your typical NTSC transfer, there's still a fair amount of detail and colour depth, although there are the usual problems with too much red saturation. The picture can also be slightly grainy at times and tends to be a little too soft, but being a straight conversion of a terrestrial television series, it was never going to be anything to challenge the latest digital offerings.

Again, the age and television origins of the episodes result in rather dull and uninspiring 224 Kbps 2.0 Dolby Digital soundtrack. Fortunately, given that this is a dialogue based series, the quality of the soundtrack doesn't really cause any issues. The dialogue is crisp and clear whilst the occasional bit of music (usually some hideous "copyright free" music that people appear to be dancing or listening too) doesn't overpower the dialogue. I get the impression that budget restraints still affected this hugely successful series, even its later years, and it's probably kinder to say that the soundtrack is simply functional rather than anything outstanding.

Whilst simple in design and implementation, the menu system at least manages to be scored and animated with clips of the show playing in the background. It even manages to open the menu with Colombo's famous catchphrase of "Just one more thing". Simple, but never the less effective.

Extras wise, it's not looking good, with only the ability to view all of the episodes in one sitting or individually select them from a submenu. Fans are certainly going to be disappointed by the complete lack of extras here (although I was only sent three out of the four discs for review so there could be something on the fourth disc - but, given that the other releases haven't graced us with any extras either, I wouldn't hold out for any). Fortunately, each episode is available with subtitles for the hard of hearing.

Enjoyable as Columbo is, this collection of episodes is not amongst the best - the best ones came during the peak of the series during season four in and around 1975. Sure, there's still plenty of guest appearances from people such as the perpetually tanned George Hamilton and the desperately typecast avoiding William Shatner, but given that these episodes were from the early 90s, and trends and fashions have changed, everything looks a little dated. Still, it's not all bad, as it does include the Emmy and Golden Globe award nominated Columbo and the Murder of a Rock Star episode plus you're not pestered with annoying adverts every five minutes.

Unfortunately, time has caught up with the wonderful Peter Falk too and given that he's now in his 80s and suffering for that most awful of conditions - Alzheimer's disease - and with no knowledge of his legendary role and, as such, no input into these DVD releases, we're simply left to enjoy his work. There's no doubting that Columbo is a classic television series that will continue to live on in whatever format is used, it's just a pity that the fans are getting season ten in two full priced parts whilst any complete collection aficionados will be most likely left with a set of unmatched box sets.

Love him or simply like him, this release of Columbo is really only worth purchasing by the fans, and fans willing to pay twice in order to get a complete series too. As for the rest of us? It's probably best to wait for yet another a rainy Saturday or Sunday afternoon and the inevitable repeat broadcast of an episode on BBC2.