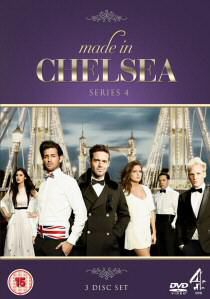 Made in Chelsea : Series 4

Meanwhile, sophisticated Sophia Sassoon makes a come-back to the Chelsea scene joining by the returning for some mischief and mayhem with the rest of the Chelsea set. Sophia has swapped her New York life for the elite streets of Chelsea and is thrown straight into a love triangle with best friends Oliver Proudlock and Francis Boulle. The question on everyone's lips is who will she choose?

Feisty newcomer Lucy Watson also walks into her fair share of drama, after the self confessed 'player' puts a few noses out of joint when she reels in various members of the male cast whilst Suave newcomer Andy Jordan turns up the heat when he takes a shine to Louise Thompson and it seems like he won't take no for an answer. What will boyfriend Spencer Matthews think of this new crush?

Andy, who is one third of the trio of new boys joining the show, are all friends with fun-loving party boy Jamie Laing. Old-timers Cheska, Binky and Ollie are as close as ever, with flatmates Ollie and Cheska forced to stand up for Binky as her fledgling relationship with Jamie takes a turn for the worse after they become more than just good friends.

Romance is on the rocky side for poor Cheska too, is she destined to be forever unlucky in love or will she finally find her soul mate with newly single ladies man Sam Cussins, or the loveable but innocent newby Stevie Johnson? Gabriella is back too and, for once, she and Ollie are getting on... but will they be more than just friends again?

Given the subject matter – and probable lack of budget for anything too flash - the quality of the transfer is actually quite impressive. With a noise free transfer, plenty of warm colours and "life" to the images, the warm waters of St Tropez look very inviting indeed. The camera work is pretty impressive too - with some classy panning techniques and moody close ups.

Sound wise, the 192Kbps Dolby Digital 2.0 soundtrack ends up being rather confusing and quite hard to understand at times. Considering it's a dialogue based series, and that the cast don't speak particularly clearly - or loudly - everything gets drowned out by the music. Matters aren't helped by the overbearing theme tune which blasts its way through everything before it - including the menu system.

The twelve episodes in the series are spread over three discs. The menu is animated and scored with the annoying series theme music whilst the small collection of extras can be found on the third disc. You can either play all of the episodes in one go or select the required one from the Episodes menu. Each episode also contains optional subtitles.

Extras wise, first up is the two minute music video of L'Americano - The Gypsy Queens ft. the boys of Made in Chelsea. Cringe worthy to say the least, it features some of the boys attempting to sing along to the tune whilst other cast members, for no known reason, bounce around in slow motion to what is already a slow tune. And if that's not embarrassing enough, you can even have a peep behind the scenes of the filming of the video with the two minute L'Americano - Behind the scenes.

Are you constantly ignored and not assertive enough? Answer yes to those two questions then you'll need to watch the two minute (not much of a guide then!) The Spencer Matthews Guide to Being King of your Terrace feature. In it, with a spot of role play, Spencer "helpfully" shows you how to be more confident in your life and office/social situtations.

And finally, we are treated to the five minute The 2012 Chelseathalon Live from Chelsea feature in which the old class takes on the new class with tricky games such as Paper, Scissors, Stone and Scaletrix Racing. It's not the most challenging of features, but never the less, fun.

See how the other half live. Well, how they want us to see them live. I've never really been into these fake reality soaps and have never bothered with any of the earlier series of Made in Chelsea and its tackier sister - The Only Way is Essex - a series which brought "Vajazzle" into the English language. Heaven knows what that posh lot in Made in Chelsea can do for the English language.

In fact, if anything, watching some of these Made in Chelsea episodes made me loathe the idea even more than before - that and the annoying "cast" of supposedly socially elite children spending daddy's money. I can't really see the point of it all. Perhaps it's something that appeals to our "want it now" generation of teenagers who have been suckled on the likes of The X-Factor too much and who'll end up being mightily disappointed at the big bad world out there.

The only thing which appealed to me was the pretty impressive camera work. There were some great close ups and panning techniques which helped remove some of those "reality" elements of the programme and (hopefully) prove to the viewer that it's not all real life and actually scripted.

Still, high production values or not, like a cast member shopping in Aldi - it's never going to be a show which will be making an appearance on my DVD shelf anytime soon. However, for those folk who can't get enough of Made in Chelsea the three disc set is sure to appeal - even more so when you consider there's a small amount bonus material to help keep the fans happy too.

So, if you'll excuse me, I'll pass on this one and leave it to the lovers of Bollinger champagne - or to those who aspire to drink it.