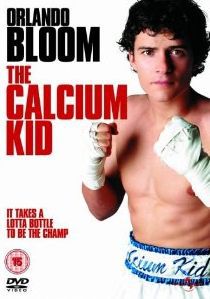 ReviewComedyOrlando Bloom
Review Article Go back to homepage
A milkman, and amateur boxer, from South East London is unexpectedly thrust into the boxing limelight and the chance to fight for the boxing world title, and it's all thanks to calcium rich milk and Sabastain Gore-Brown and his fly-on-the-wall sports documentary.
Orlando Bloom, Omid Djalili, Michael Pena, Rafe Spall, David Kelly, Michael Lerner, Ronni Ancona, Billie Piper
Comedy
2
1 Hour 28 Minutes
Thank you for supporting DVD365.net when you order using the link(s) below.
Buy DVD
Story

Jimmy "The Calcium Kid" Connelly is a milkman from South East London whose one ambition in life is to become a regional manager for his employer Express Milk Dairies. A fan of milk all of his life, his bones have become super-strong from the vast amounts of calcium swimming around his body, and as a result he is able to give, and take, some serious beating. So it is no surprise that whilst sparring with Pete Wright, a contender for the boxing world title, Pete is injured by a wayward punch.

With no time to find a replacement boxer, Pete Wright's manager, Herbie Bush, is desperate to salvage what little remains of his thread bare reputation. As a result he appoints himself as Jimmy's manager and sets him up to fight the current World Champion Jose Mendez in Herbie's self titled "Melé on the Tele". Ready, or not, Jimmy is soon propelled onto the world stage as Britain's new boxing hope, and naturally it doesn't take long for the usual media circus to descend. But matters aren't helped when he promptly turns from being a hero to villain when his scripted performance is interpreted as being racist.

So with some not so tactical advice from his always drunk Irish trainer, some inspirational rapping by his best friend Stan, his love interest Angel and even his own stalker who ends up moving into his house, the road to the top is certainly going to be less than conventional. Can this amateur from the East End really be Britain's brightest middleweight hope in the ring? Can he cream the opposition? Frank Bruno and Chris Eubank certainly think so, but has Jimmy the bottle to get into the ring?

The current run of British low budget films can probably be put down to two things - cheap Digital Video filming technology and the rapidly running out arts council grand funded via the lottery. As a result the general picture quality of low budget titles has been rapidly improving. On the whole, this can be applied here with a picture which is bright and sharp with a good level of detail and above average bit-rate throughout. There is the occasional problem with grain, especially in the darker scenes, but it is generally a quite pleasing transfer with little or no problems with artifacting or outlining.

With the film being made on a typically British shoestring budget, and presented in a mock documentary manner, there is very little scope for anything fancy in the sound department. Still, what is offered here is more than adequate with some clear and precise dialogue which remains firmly focused in the centre channel. The Dolby Digital 5.1 448Kbps soundtrack offers the occasional use of the surround channel for the ambient effects, but there's nothing here to really test a home cinema system.

Although the menu is static there is a nice introduction to the principle characters before finally resting on a rather surprised looking Jimmy. From here on the menu is scored whilst the various submenus have cut scenes from the film before showing the options. However, one annoying feature which seems to be unique to Universal Pictures DVD releases is that the menu times out after about thirty seconds before returning to the previous menu and eventually starting the film. I don't know whether most people like this, but I find it all rather annoying.

The extras consist of a number of deleted scenes and outtakes. Whilst the deleted scenes are rather poor, with no real explanation as to why they were removed, the outtakes are actually rather funny with Omid Djalili mostly falling about laughing and getting the director very annoyed. There's also a nice scene with Frank Bruno imitating, rather well I might add, Chris Eubank (who also appears in a deleted scene). Things are rounded off with, horrors or horrors, a trailer for Billy Elliot - The Musical. Yep, if you thought that the film was bad enough, you can now endure the musical too!

After global mega hits, and handsome pay cheques, in the form of The Lord of the Rings and Pirates of the Caribbean, it takes a brave man in the form of Orlando Bloom to take up this small budget film. Trouble is, brave as his efforts are, it doesn't really pay off and the only people falling over themselves to see this film will be his hordes of female admirers - and it won't be for his acting prowess either. Even the brief appearance, and completely awful acting, from Billy Piper can't really get the men interested.

Although Orlando Bloom is the principle cast member, it is Iranian comedian Omid Djalili who steals virtually every scene and gets all of the laughs. If anything, this film is a vehicle for his comic talents and with some prized lines, expert timing and even funny laughter outtakes, he alone manages to rescue what is essentially a rather lacklustre film. It's just a pity that the extras don't really add up to much, after all, where is the making of featurette, director's commentary or even an interview with ladies hero Orlando Bloom?

I could round off with some pun about boxing, but I'll resist. However, if you leave the ladies to slobber over Orlando, you may just get them to allow you to watch the next world heavyweight boxing championship in peace and quiet. You never know, they may even start to like boxing.