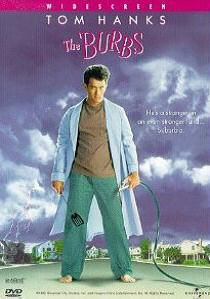 ReviewComedyHorrorTom Hanks
Review Article Go back to homepage
All that Ray Peterson wanted to do on his holiday was to sit around the house, drink beer and relax. However, with missing neighbours and strange noises coming from their new neighbours basement, this vacation is going to be far from peaceful for this suburbanite.
Tom Hanks, Bruce Dern, Carrie Fisher, Rick Ducommun, Corey Feldman, Wendy Schaal, Henry Gibson, Brother Theodore, Courtney Gains, Gale Gordon
Comedy, Horror
1
1 Hour 42 Minutes
Thank you for supporting DVD365.net when you order using the link(s) below.
Buy DVD
Story

It's your typical American neighbourhood of white picket fences, carefully pruned lawns, happy children and strange new neighbours who only ever appear at the dead of night. Already stressed and over worked, Ray Peterson had taken a much needed break from work only to discover that his new neighbours were not so neighbourly at all. With strange noises and lights coming from their basement in the dead of night, strange shapes digging in the back garden during storms and a ring of electric fences around the garden, it's only to be expected that the neighbours would start to talk. There's only one thing for it. A plate of cookies and a friendly introduction to the Klopek's.

But the introductions don't go too well and Ray ends up with more questions than answers, especially regarding the strange family members and the mysterious departure of the previous occupants. As time goes on, Ray becomes more and more paranoid about their activities and even cries off going on a much needed vacation with his wife in order to concentrate on his spying. Things aren't helped by his neighbour and friend, Mark Rumsfield, and his over active imagination. Between them, the pair are soon believing that they live next to the Manson family.

But when elderly neighbour Walter Seznick disappears in the dead of night, and leaving his beloved dog to wander the street, Ray, Mark and ex-military neighbour Art Weingartner turn their attentions to his mysterious neighbours. And when the Klopek's leave the house for a few days they decide to go over the fence and finally uncover what the Klopek's have hidden in their basement. So armed with rifles, high-powered binoculars, a shovel and a walkie-talkie, Ray and Mark commence their mission to find Walter. It's going to be one hell of a weekend.

For a film of this age the picture is in surprisingly good condition. Universal have done yet another good job in cleaning up the picture which results in a bright and colourful transfer with a good level of detail and colour depth throughout. There is the usual problem of slightly too much contrast during the night time scenes and the picture does exhibit signs of grain and there are a fair few problems with dust specks and other print damage, but for the age of the film it is a very good result indeed. However, one bizarre feature is that the theatrical trailer has a bit rate which is significantly higher than the below average transfer rate used on the film.

The age of the film means that the sound department is going to be nothing that special. Ok, so Universal could have made an effort to tidy things up and provide a full blown 5.1 soundtrack, but to be honest it's not really worth the effort. Fortunately, the Dolby Surround 192Kbps soundtrack is more than adequate for its needs and the dialogue is clearly audible and a surprisingly effective musical score. There is the occasional use of the surround channel, but given the sonic limitations of the soundtrack it is nothing particularly special..

The menu is a static and silent affair with the various options presented in list fashion on the screen. The features listed on the rear of the DVD case also don't mention the fact the disc also includes an alternate ending. I'm not sure whether this is a deliberate ploy or just a mistake, as if they attempted to conceal the ending as an Easter egg then they didn't do a very good job of it (plus it is too good an extras to be hidden away as an Easter egg). The picture quality and sound of the alternate ending is nothing extraordinary, but it's good enough to be able to appreciate the scene.

The production notes, biographies and the web link offer little of interest and can be put down as being filler material. Mind you, the production notes are fairly recent and fans of Hanks can see a complete list of films he's appeared in, including viewing the trailer for Apollo 13. There is also the addition of the theatrical trailer but, like most old trailers, the picture is very noisy with large amounts of print damage. Fortunately, it's worth it all just for that alternate ending.

Filmed way back in 1989, and with the global success of Big, Hanks just was starting to make a name for himself as a comedian. So quite how The Burbs slipped past in the night unnoticed, and underrated, is one of those strange questions which seldom ever gets answered. So The Burbs was destined for a life on video and a slot in the late night television schedules away from a larger and much more appreciative audience. Ok, so the storyline is not going to be that taxing, and I guess the satire is a little dated now. But it is the slapstick humour and the wonderful paranoia of Bruce Dern's ex-military character that steals the film. In fact, the entire cast is great, from the genuine creepiness of Klopek's to the neurotic, and fridge emptying, Art.

As well as being exceedingly funny, and surprisingly creepy at times, The Burbs also manages to poke fun at the myth of the suburban utopia of traditional values, squeaky clean cars and well kept and watered lawns. Even an episode of the X-files managed to poke fun at these unwritten, and even sometimes contractual, do's and don'ts of living in a leafy suburb. And heaven help anyone who breaks the rules.

This is classic stuff from Hanks and it's just a pity that The Burbs is only available on region one. Fortunately, it's from Universal's back catalogue material so even if you decide to import it's not going to break the bank. And with a half decent set extras, fans of Hanks are sure to enjoy this wonderful satire on the wonders of living in suburbia. It also makes you wonder about those strange neighbours who've lived next door for years and you're yet to see, let alone speak to.