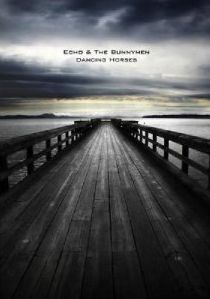 Formed in a post Punk Liverpool in September 1978 Echo and The Bunnymen enjoyed chart success in the early 80's and also had a cult following in the States. This film captures the latest line up performing tracks old and new. This is a live show of a proper band so you know that they will come on they will play and on the whole it will be quite dark. No theatrics, no frock changes just a great performance.

From the early tracks such as 'Never Stop' to the more recent 'Nothing Lasts Forever' this is a great performance from a great band. I dislike effects when watching live recordings and this does not disappoint in that area, or any other for that matter. A no nonsense portrayal of a live band. McCullochs vocals are a little more raspier these days, but after all these years and on stage cigs, it is hardly surprising. This is an accomplished set from a band almost 3 decades in the business. A great disc.

The menu is a scored static shot of the front cover, with options for playing the complete performance, a track listing pick, Interview and an audio selection, being PCM Stereo or 5.1 Dolby Digital.

The interviews with Ian McCulloch and Will Sergeant are conducted separately with the questions posed to them displayed on the screen beforehand. This is one of the better interviews of an artist I have seen with no annoying fast cuts and edits with faux cine style quality or any of the other effects that many film makers insist on putting in. The subject is asked a question and the subject answers the question. Simple as that. This runs for 47 Minutes and 53 seconds and is quite an enjoyable and interesting interview.