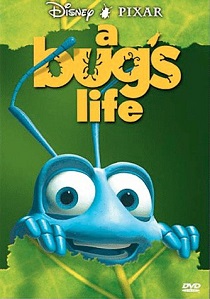 The film is based around an ant colony which each year has to collect an offering for a group of bulling grasshoppers led by the savage Hopper. When Flick accidentally destroys the offerings he volunteers to leave the colony and search for warrior bugs to come and defend the colony from the grasshoppers. The heads of the colony jump at the chance for him to leave as they don't expect him to return.

Flik stumbles across a band of hapless circus performers who he mistakenly thinks are warriors after they accidentally defeat a group of angry flies. Flick hires the bugs, who think they are going to put on a show for the ants, and Flik thinks he's hired the best warrior bugs around. It doesn't take much thought to wonder what happens next!

The DVD has the world's first direct digital transfer of the film, giving the clearest picture yet on DVD. At times I honestly had to question whether I was actually looking at real scenery rather than something generated by a computer. The beginning as the 'camera' pans in on the tree is just simply stunning.

The computer animation seen here is simply amazing and outperforms the rival film 'Antz' by miles. It is credible to believe that some of the frames took over 100 hours to render. If you ever needed an excuse to go out and buy a DVD player, then this is it. There is no way the likes of video or Laserdisc will ever reproduce the pictures seen here.

In theory, you actually have two different copies of the same film on the disc. Rather than cropping the picture for the full screen version, certain scenes were re-rendered as to not lose any of the picture. Wonderful! The surround sound has been put to good use with the grasshopper swarms travelling from the rear of the soundstage to the front along with the bug city scene with all the busy goings on.

Although the extras don't appear to be much, they are brilliant. Not only do we get the two end credit sets of outtakes (a brilliant idea again used in Toy Story 2) but we get the award winning animated short 'Geri's game' where we can see how far textured computer animation has come. If you've seen 'Toy Story 2' then you might notice that the toy repair man is in fact 'Geri'