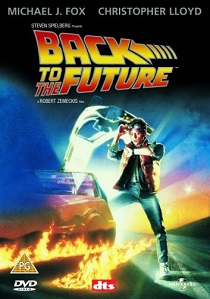 Back to The Future charts the adventures of Marty McFly, a high-school student in the small Northern California town of Hill Valley. The first of his three adventures start in 1985 when Marty's mentor and friend, the eccentric genius scientist Doc Emmett Brown, invents a time machine. Most people would perhaps expect a time machine to look something like HG Well's offerings, but the Doc has gone and used a DeLorean for his. In the mayhem that follows the Libyans arrival at the Doc's demonstration of the time machine, Marty is sent back to November 5th 1955. This is a very important date for the Doc as it is the day he conceived the idea of the flux capacitor and time travel. Unfortunately for Marty it is also the time when his future parents are teenagers and yet to meet, and when he accidentally keeps them from falling in love things start going from bad to worse. With the future now changed Marty has to get his parents back together as well as keeping the local town bully Biff Tannen at bay. He needs to do all this before the changes in time become irreversible and obliterates his very existence. Fortunately, he's still got help in the form of the much younger Doc in the past, and he's going to need his help to enable him to travel back to the future.

Back to The Future Part II continues with Doc returning from the future to convince Marty and his girlfriend Jennifer to journey into the future. They take the, now flying, time-traveling DeLorean into the year 2015 to straighten out the future of the McFly family. But Biff Tannen steals the time machine (but quite how he knows how to use it is a different story), travels back to 1955 and gives his younger self a book containing 50 years of sports statistics. This almanac enables the young Biff to amass an enormous gambling fortune and transform the idyllic Hill Valley into a living hell. To restore the present, Doc and Marty must return to the events of their previous adventure in 1955 and retrieve the book and ensuring that their previous adventures in the past are not affected.

In conclusion to the trilogy, Back to The Future Part III sees Marty receive a telegram in 1955 from Doc Brown who has been transported further back in time to 1885. Marty discovers that Doc is murdered shortly after writing the telegram and embarks on a rescue mission, where he must save Doc from death at the hands of yet another member of the Tannen clan. However, there are a number of complications preventing a quick return to the future. For a start there's no petrol for the DeLorean and a band of gun slinging outlaws have got it in for both the Doc and Marty. Then there's the question of the Docs effectuations with a pretty school teacher, and there's nothing like the love for a woman to screw up a well conceived plan.

For films which were made in the early and late eighties you'd be expecting to see problems with the overall picture quality. However, all three films have been digitally remastered making them look as fresh today as they were twenty years ago. I was totally amazed by the complete lack of any picture imperfections. There were no signs of dust scratches, artifacting or outlining and the bit-rate remained impressively high throughout the film.. The colours are also bright and colourful with excellent amounts of detail and colour tones. In fact, the only way you can tell that the film is a re-release is that they keep referring to 1985 and that their dated clothes.

Although all thee films offer the choice of a DTS and Dolby Digital soundtrack there is little really on offer to test either format. With it being mainly dialogue based there is no real use of the surround channels other than the occasional burst from the score and an intermittent ambient effect. Never the less, the dialogue remains clear and precise in the centre channel and there's never any need to keep adjusting the volume control. Even though there's little to choose between the two sound formats, I'll still opt for the DTS soundtrack over Dolby Digital every time.

I normally detest the paper digi-pack packaging that so many box-sets appear in, but this one is rather special. It contains some wonderful artwork and embossed lettering which really shows up just how much time and effort has gone into this set and just what a gem it is. It also includes a reasonably interesting booklet, although the details are just a recap of the information contained in the many extras. Mind you, I'm pretty much certain that this packaging won't be a fresh looking in another twenty times as these films do today.

If you thought that the films and packaging were good then once you examine the extras you're going to be ecstatic with the excellent background material on these classic films. The three discs boasts a formidable five hours of additional material including an Audio Commentary, Deleted Scenes, Behind the Scenes Footage, Interviews with the cast on each of the three films and some reasonably animated and scored menus. Although the extras are impressive enough, the majority on concentrated on the first disc.

The first film is the only one containing an Audio Commentary from Robert Zemeckis and Bob Gale as well as the Universal's animated anecdotes. I'm totally baffled why they didn't manage to provide anything like this on the second and third films. The only answer I could manage to come up with was time constraints. Whilst the audio commentary is interesting enough, the anecdotes are rather sparse and not that particularly interesting. They are so intermittent that you can easily forget you enabled the feature and with the commentary enabled they become rather redundant.

A view of the {I}Making Of documentaries are a must, especially on the first disc where you can witness for yourself a hideous eighties hair style sat on top of the one and only Steven Spielberg. It's also interesting to learn why Crispin Glover's character George McFly never returned to the sequels - I bet he's still kicking himself. The Deleted Scenes and Outtakes are also good with plenty of goofing around, mainly from Michael J. Fox.

One major omission from these extras would have to be the Huey Lewis and the News music video. Whilst the third disc has the ZZ Top Doubleback music video, like today's music scene, Huey is no where to be found. This is another puzzling matter, especially since they provided the soundtrack for the first and second film. Oh well, you can't have everything.

Because the sequel to Back to the Future was made five years later the crew had to re-shoot large amounts of footage, especially the dance hall scenes. Without the digital wizardry available to filmmakers today they had to ensure that these new scenes blended perfectly in with the original story. It's certainly convincing and is a real credit to the film makers.

Whilst the first film is most definitely the best in the trilogy the second has to be the weakest, even if it does have all the clever camera work. Even {i{Robert Zemeckis goes as far as admitting this, citing problems with filming two films back to back left him unable to help in the editing and post production of the second film. Fortunately, the third film makes up for this slight dip and it manages to produce plenty of laughs. So, everyone is now happy that we finally have Back to the Future on DVD and we all understand the problems of time travel.