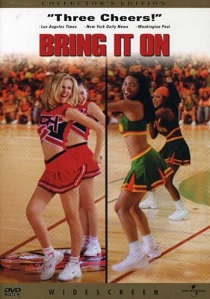 When Torrance Shipman is made the captain of the Toros, a cheerleading squad at an affluent school in San Diego, hopes are high that she'll lead them to their sixth successive national cheerleading championship trophy.. However, her hopes are soon dashed when she discovers that the previous captain of the team stole all of their best routines from a hip-hop influenced poor inner-city school.

Determined to come up with a new routine she hires a choreographer to help with new ideas and whip the team into shape. Unfortunately, when the team go to the preliminaries they discover that their routine is far from unique and the inner city team of East Compton are turning all the heads with their dazzling routines. To be in with any chance of winning the Toros must come up with a totally new routine before the finals in three weeks time.

The picture is absolutely outstanding with a gorgeous clarity and colour detail beyond belief. At certain times during the film the bit-rate continuously hits the maximum before only slightly dropping down. It is so good that you could almost be there and seeing the action for yourself. The only fly in the ointment would be that at times the characters do suffer from some annoying outlining and the picture can be just too damn good. If the future of entertainment is DVD, then the future is most definitely here.

The disc also offers a Dolby Digital and DTS soundtrack. Whereas it is normally difficult to separate the two competing sound formats, here the winner is clear from the first thirty seconds of the film. Yet again the DTS soundtrack trounces the Dolby version with its superb level of separation and clarity. The initial scene has the cheerleaders performing in the schools sports hall. When listened to with the Dolby Digital soundtrack the cheering and clapping audience seems to be muddled together, but when you switch to the DTS soundtrack you can virtually hear each individual chant and clap. Absolutely brilliant!

Although the menu is scored it is a dull and static affair, but this should not detract you from the large collection of extras bursting from the disc. There's a reasonable "making of" with some interesting insights and cast member interviews. However, the best sections would be the deleted and extended scenes presented by the enthusiastic director, and a very attention grabbing home movie of the car wash scene (you'll soon understand when you've watched the film). There's also an interesting "Universal Anecdotes" feature which soon becomes very distracting and annoying.

If people assume this is just a teenage "chick flick" then they'd only be partially right. What the film does reveal, although stereotypically, is the amount of pain the cheerleaders endure and the amount of effort they go to in order to entertain the hoards.

If you ever needed an excuse to like the game of American football then this film really provides you with one. The choreographed routines are absolutely amazing, especially the dazzling hip-hop routines from the East Compton team, and the championship finale really does warrant multiple viewings.

Any game which encourages slim young women to take up gymnastics and wear short skirts has my vote of approval and should definitely be considered by other (UK!) sports. This film is sure to be a classic, as is the films soundtrack, which contains some cracking pop and hip-hop tunes. If you don't like the film then the soundtrack is certainly worth further investigation.