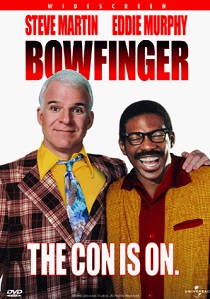 Unable to get Hollywood's biggest star to star in his mega low budget film Cubby Rain, a film about aliens in rain drops(!), he takes the next best route. With a band of illegal Mexican immigrants on his film crew, he secretly films Kit as he goes about his day to day business and uses Kit's slow-witted brother Jiff as a stand-in.

His cast of unknowns are also unaware of Kit's refusal to be in the film. A mid-western girl who is desperate to get into acting and she'll do anything, plus, amongst others, a washed up and overacting actress. Bobby manages to convince them that he works like this and having to chase after his car whilst spouting lines is normal. As Bobby's group of actors interact with Kit he becomes more and more paranoid about aliens and abduction which Bobby uses to his full advantage.

Again Universal manage to provide a sparkling picture with a high bit-rate through-out. This is yet another title with dual Dolby Digital and DTS soundtracks, albeit at the lower 768kb/s to accommodate them both. The scene where Kit has to cross a busy highway really brings out the quality of the DTS soundtrack, the separation is simply outstanding. There's even room for a directors commentary plus some outtakes with a wonderful repartee between Martin and Murphy.

After a few recent poor films Steve Martin is really back on form in a film he both wrote and stars. Eddie Murphy plays his two parts in the film wonderfully, with Kit standing out, and it is probably one of his funniest and cynical roles for a long time. I think he even manages to send himself up by modelling his pretentious character on himself.

The chemistry between Martin and Murphy really works and I would be very surprised if they didn't do another film together. The final scenes where Jiff and Bobby are starring in 'Fake Purse Ninjas' is probably the highlight of the film, and it wasn't even going to be in the original cut!

With 'The Bone collector' also offering similar soundtrack options, along with numerous extras, let's just hope Universal keep this excellent trait going. It is just a pity it can't offer these options on their region 2 discs. If you have a DTS compatible system then this disc is simply a must.