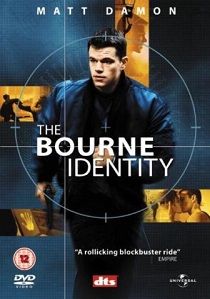 When a fishing trawler in the Mediterranean sea manages to fish something out of the ocean that is neither fish or plastic, a conspiracy theory is soon thrown into the open when the barely alive man makes a recovery. Unfortunately, the man has no idea who he is or just how he ended up floating near death in the sea. Matters are made worse when he is informed by his rescuers that he has two gun shot wounds in his back and a strange laser capsule containing a Swiss bank account number embedded in his thigh.

Desperate for any indication to his identity he follows the only clue he has and heads for Switzerland and the bank holding his account. With no money to assist his travel he ends up sleeping rough in a Zurich park where he is apprehended by the local police for being a vagrant. He becomes even more surprised when he manages to quickly overpower the two officers and leave them in crumpled and groaning heaps on the ground. That certainly rules out a few possible occupations for our mystery man.

Upon his arrival at the bank, not only do the staff know him but he is presented with a safety deposit box. Once opened he is shocked to discover that it contains numerous passports and identities including one which is Jason Bourne, a US citizen who lives in Paris. Lifting an additional partition in the box he also finds a loaded gun and piles of money in a wide range of currencies. But when he enters the US embassy in Zurich he quickly discovers that he's not as welcome as he first thought.

Essentially, the plot takes plenty of liberties with Robert Ludlum's original novel and is one of those classic overused stories where a person looses their memory and, along with strange ability to throw knifes, slowly discovers a grim secret. Why do they always end up being some sort of dark and mysterious person and simply not a bloke called Derek who works for the council and drives a Nissan Micra?

The picture is bright and colourful with a good level of detail throughout and there are no signs of any dust scratches or other picture imperfections on what is a clean print. The high bit rate also helps to ensure that there are no problems with artifacting or outlining. This is all the more important when the majority of the film takes place either at night or in dimly lit indoor or exterior locations. Apparently, the people of Paris are yet to hear of the 100 watt light bulb.

Universal have yet again come up trumps with both Dolby Digital and DTS soundtracks provided on the disc. DTS is finally being taken seriously in the region two market and for this Universal must be congratulated for their part in its success. Both soundtracks are excellent with plenty of useful activity in surround channels and, when called for, some ground shaking LFE effects. However, the DTS soundtrack still manages to out class its rival with a more dynamic presence that all action films cry out for.

The menu is scored and animated with a number of cut scenes that give a hint of the action in store. However, dig a little deeper and you'll discover that the extras are a little on the thin side, even though there's a full length audio commentary. Whilst the commentary is the certainly the best of what is on offer, at times it ends up becoming a little too political for my tastes and ends up becoming rather tiresome. There's also an alternate ending, a number of deleted scenes, a "pat on the back" featurette and a number of theatrical trailers, one of which is a wicked teaser for Hulk.

After the likes of Good Will Hunting and The Talented Mr. Ripley, this film is a completely different direction and huge gamble for Matt Damon. So, does it pay off for Matt? Well, I would have to say that I was a little suspicious at first and I can't seem to remember hearing anything about it cinema, even though it did manage to pull in a not too unreasonable £8 million at the UK box office.

Never the less, this film is actually rather good and certainly has to be one of the better spy thrillers of late. There's plenty of action and suspense, some good stunt work and a rather spectacular car chase around the streets of Paris in a humble Mini. With half of the Paris police force in hot pursue you could have almost been back in Turin and the classic Italian Job, except this time everyone is French. So, queue lots of splendid car crashes, flying motorcyclists and irate Frenchman waving fists at just about anyone and anything. Your classic car chase then.

Although the script isn't one of the most demanding you'll see, Damon has certainly opened up a new and more exciting route for his career. And thus, his action foray raises a thorny question. Does Damon have the necessary charisma to don the black tuxedo and drive a gadget filled car? With Pierce Brosnan signed up for Bonds 21 and 22, there's plenty of time to hone his skills before challenging for the ultimate role and number. This film has certainly gone some way in proving that he may just be able to manage it.