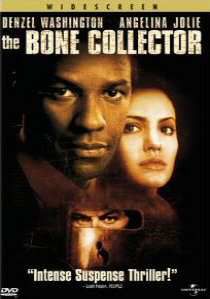 ReviewThrillerCrimeAngelina JolieDenzel Washington
Review Article Go back to homepage
Lincoln Rhymes, one time top homicide investigator, is terribly injured in an accident during an investigation. Now bedridden, he can only watch whilst police officers bungle an investigation into a bizarre serial killer. He teams up with a rookie officer who searches for clues until Rhymes realises that they could be the next target.
Denzel Washington, Angelina Jolie, Queen Latifah, Michael Rooker, Ed O'Neill, Mike McGlove, Luis Guzman, Leland Orser, John Benjamin Hickey
Crime, Suspense/Thriller
1
1 Hour 58 Minutes
Thank you for supporting DVD365.net when you order using the link(s) below.
Buy DVD
Story

There's a serial killer on the loose in New York and the police's best man has been severely injured during an enquiry. Now permanently disabled he starts the investigation from his bed along with the beautiful Amelia, a gifted rookie cop with an impressive arrest rate and discoverer of one of the previous victims. She becomes his eyes and ears on ground as she follows his instructions via a radio.

When the sadistic killer strikes, with each murder more gruesome than the last, he leaves a bizarre collection of clues which Lincoln has to fathom. Using his unique knowledge of forensic science he is soon on the killers trail. However, with more victims appearing without any success, Captain Howard Cheney takes them off the case forcing them to work alone. Using the clues collected it leads them to a book store and an early nineteenth century book ...

The picture is striking with a high bit transfer rate throughout. The Dolby sound is equally impressive, with the surround channels used extensively for the atmospheric sounds. However, the DTS soundtrack is simply stunning. By offering both Dolby and DTS, albeit with a lower 768kb/s to accommodate them both, we now have the opportunity to directly compare both soundtracks, and the result? DTS blows Dolby out of the window, road and country, it is awesome. If there were ever an excuse to update your system to accommodate DTS then now is the time.

It is exciting to see that Universal has decided to add a DTS soundtrack as well as the standard Dolby, indeed it is something that many other companies are set to follow. Surprisingly, there is still plenty of room on the disc for many useful extras plus DVD-ROM material, even if it is just a few web links.

It is an impressive thriller, and is certainly on par with Se7en. As usual, it is the person you least expect to be the killer, until all the pennies start to drop and it finally makes sense. Cue the final thrilling, edge of the seat, ending and a predictable slow motion finale. But hey, aren't all films predictable?!