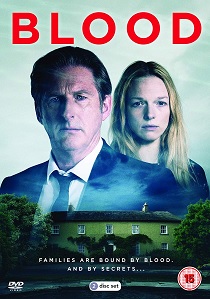 ReviewTV SeriesDramaCrimeAdrian Dunbar
Review Article Go back to homepage
After the sudden death of her mother, Cat Hogan returns home to West Meath and back to to the family she has spent the last ten years trying to avoid. But is her mother's death an accident - or worse...?
Adrian Dunbar, Carolina Main, Diarmuid Noyes, Ingrid Craigie, Grainne Keenan, Sean Duggan, Shereen Martin
Lisa Mulcahy, Hannah Quinn
Jonathan Fisher
Television, Drama, Crime
2
270
Thank you for supporting DVD365.net when you order using the link(s) below.
Buy DVD
Story

It's late at night in rural Ireland and Cat Hogan is returning home to West Meath in a hurry. She's having to deal with some bad news - the sudden death of her mother in an accident at home. It all gets too much for her and she pulls over to the side of the road to vomit. If things can't get any worse, a police car pulls up behind her and the local officer approaches to investigate. It's a closely knit community and the officer recognises her. Living in Dublin, Cat hasn't been home in years and the officer is pleased to see her and wishes to be remembered to her father Jim. Still, he has to do his duty, and a breath test is required. Cat had been drinking earlier and fears worse, but she's surprised to learn that she's passed the test...

When Cat finally reaches the family home, meeting her father Jim and siblings Michael and Fiona, the tension could be cut with a knife. It's at that point she learns that her mother, who was suffering from a long term illness, had apparently felt weak that morning, fell and struck her head on a stone by the pond. Given her mother was so weak, Cat doesn't understand why she was outside, and left alone whilst Jim, a local GP, was at work.

Suspicious of the circumstances behind her mother's death, Cat looks around the garden and the place where her mother fell. Cat starts searching and soon finds a piece of her mother's jewellery by the pond. An ornamental stone frog is missing too. As she goes through her mother's possessions she finds her phone and listens to the voicemail where she finds a potentially threatening message from Jim.

Made to feel like an outsider who can't be trusted, Cat has been well and truly thrown back into the fractured family dynamic she's spent the past 10 years trying to escape. As Cat's past start to plague her, she begins to question how her mother died. But even with an angry and controlling father like Jim, does that really mean he's guilty of murder...?

Netflix has changed the way we view television programmes and with big budgets come big expectations - both in the quality of the picture and the quality of the sound. So, when you have a small budget and a small production team something has to give. This usually means some savings to be made in the equipment used in filming and the post-production methods to polish around any rough edges.

So it was a little disappointing, but not unexpected, to discover that there was only a Dolby Digital 2.0 192Kbps stereo soundtrack. Whilst it's more than capable for the production, with the dialogue clear throughout, it just lacked that little something to make it special. There's no need for your surround system here, your soundbar or television speakers will be more than good enough.

It may have been thanks to the typical Irish overcast weather, but the exterior scenes certainly looked a little depressing and washed out. It certainly reminded me of my time in Ireland where, when it wasn't raining, it looked like it was about to start. Never the less, with an average bitrate throughout, the picture is bright and colourful enough with a fair level of detail. The darker interior scenes can suffer from grain at times and the colour pallet can lack depth, but there's no outlining.

Blood comes as a two disc package, with 3 episodes on each disc. Whilst the menus are your typical static and silent affair, there's something strange to be found on the first disc. Yeap, unlike most television series to DVD releases, Blood comes equipped with a bunch of extras.

Whilst the Picture Gallery can be classed as your usual block of filler material, the Cast and Crew Interviews are certainly not and, whilst not strictly classed as an extra, there's an additional 17 minutes of drama too. No doubt trimmed from the television broadcast for timing purposes (you've got to fit in those adverts somewhere!), and not having seen the terrestrial broadcast, it's virtually impossible to know where the extra scenes are. Still, if you missed the series on television, you can be rightly smug in knowing that you'll have seen more of Blood than others.

The interviews with the cast and crew look like they're straight from the folder marked "promotional tour", but they are never the less interesting to view. Split into interviews with Adrian Dunbar, Carolina Main, Executive producer Jonathan Fisher, Writer Sophie Petzal and the Crew, the interviews last for around 20 minutes and cover everything from the usual praise for each other, the casts reasons for taking the role and discussing their character all the way to the production crew scouting the locations.

Blood was already a hit in Ireland and it was very well-reviewed but, like BREXIT, that doesn't necessarily mean that it will travel well across the border. Fortunately, the programme formula is a good one - and, over the years, it's been tested over and over again with success. So, if the formula works, why break it?

So it was quite a surprise to discover that the series had been picked up by Channel 5, a channel more known for Big Brother, Aussie soaps and more American imports than you could wave a star spangled banner at.

Whilst Channel 5's change of direction is an admirable one, it pretty much means that most people will miss this series and it'll end up being another "under the radar" programme which will either be picked up on a "word of mouth" basis or via our shiny little silver disc. Fortunately, the DVD offers more than just the programme as, not only are the episodes extended, it's stocked with a welcomes bunch of extras which, for a television series, is a bit of a rarity.

If you're a fan of Broadchurch and the superb Unforgotten then the compelling drama Blood is definitely a series for you. Writer Sophie Petzal has really produced the goods and Blood feels like a gritty crime novel that fans of the genre are sure to enjoy. We haven't heard the last of Sophie Petzal.