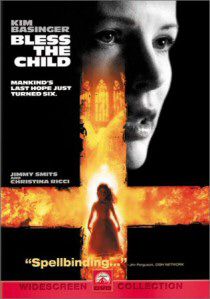 Maggie O'Connor is a single woman and career nurse. That is all set to change when her sister Jenna, who she has not seen her for many years, makes a surprise appearance with her new born baby girl Cody. However, the visit was not the reunion she expected and she is left with the baby. With her sister gone she raises the child as her own but soon discovers that Cody is autistic.

A number of years later Jenna, along with mysterious cult leader Eric Stark, returns for Cody just as she is starting to exhibit strange and supernatural powers. With Cody taken from her she meets an FBI agent who's a specialist in occult related crimes. He's in the process of investigating a number of child murders in the area and Eric Stark is a prime suspect.

The day time picture is bright and colourful, albeit if a little washed out, whilst the picture is particularly impressive during the darker scenes where the bit-rate increases resulting in a sharp picture without any artifacting. However, it is the pictures clarity which is its downfall as it results in some ludicrous special effects. The CGI demon effects are so blatant it is laughable and makes the film very hard to be taken seriously.

The sound is only average with very little use of the surround channels. There were so many times I expected the action to appear in the rear channels that I kept having to check that I'd turned on the surround speakers. However, on the plus side, the dialogue was clear and easily audible in the centre channels and, when called for, the musical score was used effectively in the rear channels.

Although there's a fair amount extras the menu is still completely static and boring. However, Universal are finally starting to learn when it comes to the extras, however, you could be cynical and claim that the disc has been padded with extras to bolster a below par film.

Another downer is the acting which is rather poor from Kim Bassinger and Holliston Coleman which is neither scary or dramatic - especially if you look at the genuinely chilling performance from Haley Joel Osment in The Sixth Sense.

Considering the recent flock of supernatural films such as Dogma, End of Days and to a lesser extent Stigmata, it actually makes a change that where there is a fight between good and evil you actually see the forces of good at work.